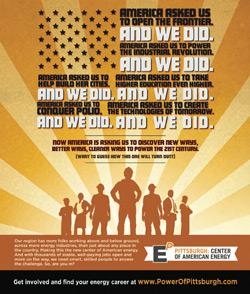 Images of industrial Pittsburgh have plagued the city’s reputation for decades, even though most steel and iron mills have exited the region, replaced by new companies in the medical and service sector.

However, with the rise of Marcellus Shale drilling in Western Pennsylvania, industrial development is poised to return to the Steel City and its surroundings.

To promote this new potential source of energy, fracking companies and their boosters aren’t hiding its history as a major industrial center, they are using ads to whitewash it.

The ads produced by the Energy Alliance of Greater Pittsburgh tout the city’s past glories. It suggests — in the ad here — that Pittsburgh has always been ready to answer America’s energy needs. The group boldly claims that Pittsburgh’s reputation as an industrial powerhouse is evidence of the region’s future ability to lead in fracking for natural gas.

The image is carefully crafted into the shape of an American flag, emphasizing Pittsburgh’s patriotic accomplishments, while silhouettes of both blue- and white-collar figures are positioned together at the bottom, implying a sense of cooperation and respect in the industrial workplace.

In short, it greatly obscures the harsh realities that accompanied those achievements, such as deadly smoke pollution, worker injuries and abusive labor practices. While it is true that Pittsburgh was the leading U.S. producer of steel for much of the 20th century, the ad’s characterization of its industrial past as overwhelmingly beneficial to America is misleading.

By boosting Pittsburgh’s legacy, at the expense of its historical reality, the Power of Pittsburgh ad omits a critical truth: It denies the serious problems that arise from industrial production.

At issue is the ad’s true purpose, less to celebrate the city’s past productivity than to tie fracking, billed as “cleaner ways to power the 21st century,” to an assumed public support for a controversial practice.

This manipulation of history is especially disturbing as hydrofracking for natural gas in the Marcellus Shale poses similar problems to those that occurred in 19th- and 20th-century steel mills.

One of the most egregious problems highlighted in S.J. Kleinberg’s book In the Shadow of the Mills, which details the lives of the mill workers in industrial Pittsburgh, was that factory owners refused to make their manufacturing processes safer for workers, since no legislation forced them to. That refusal resulted in many on-site worker injuries and deaths.

Today, fracking companies have limited government oversight to ensure their extraction of natural gas — a process that involves blasting water, sand and harmful chemicals several thousand feet into the earth — does not cause harmful side effects to the nearby drinking water and environment.

According to the Pennsylvania Dept. of Environmental Protection (DEP), in regions where fracking has already been developed, residents’ water has turned brown and tested positive for methane, benzene, heavy metals and many other toxins. However, in most cases, the industry-friendly DEP denies the contamination is due to fracking.

During his tenure, Vice President Dick Cheney pushed through a loophole for hydrofracking in the Energy Policy Act of 2005, which exempted the process from the Safe Drinking Water Act. That made fracking especially hard to regulate.

Much like the laissez-faire climate exploited by powerful 19th- and 20th-century steel and iron mill barons, there is little outside government agency forcing gas companies to guarantee safe extraction methods.

In this sense, the Power of Pittsburgh ad for gas companies operating in the Western Pennsylvania region has adroitly manipulated history in its promotion of fracking, conveniently forgetting the tough lessons to be learned from the city’s dark past.

If Pittsburgh is to embrace its industrial legacy in order to determine the future success of shale fracking, it must examine its history fully, acknowledge not only its triumphs but its failures. To do otherwise is to return to an era of corruption and pollution in pursuit of economic gain.