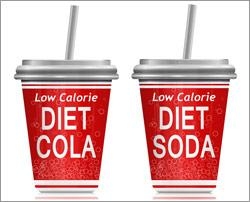 Based on a review of recent research, a Purdue University professor has released a report that concludes that frequent consumers of artificial sweeteners -- and diet soda and other products that use them -- appear to be at increased risk for weight gain and several chronic medical conditions.

All of which was quickly disputed by the American Beverage Association (ABA).

Susan E. Swithers, a Purdue professor of psychological sciences and a behavioral neuroscientist, evaluated a variety of studies, both human and animal.

Her bottom-line conclusions are that the research "suggests" that frequent consumers of "high-intensity" or artificial sweeteners, such as aspartame, sucralose and saccharin, are at increased risk for excessive weight gain, metabolic syndrome, Type 2 diabetes (T2D) and cardiovascular disease.

The paper (published in Cell Press) also explores the "hypothesis" that "consuming sweet-tasting, but non-caloric or reduced-calorie food and beverages interferes with learned responses that normally contribute to glucose and energy homeostasis" -- meaning that such foods may negatively affect the body's normal metabolism, perhaps triggering weight-gain and disease factors.

Among other points, the report suggests that metabolic "derangement" associated with regular consumption of artificial sweeteners may cause people to ingest more calories, by causing their bodies to crave sweets or foods that help correct drops in blood sugar.

Swithers cites results of a number of human studies, including the San Antonio Heart Study, which reported an increase in body weight gain for adults and adolescents who consumed artificially sweetened beverages over beverages regularly sweetened. She also cites the Nurses' Health Study and the Health Professionals Follow-up Study, which reported greater risk of type 2 diabetes, high blood pressure, heart disease and metabolic syndrome (which is related to diabetes and cardiovascular problems) for consumers of artificially sweetened beverages.

The "general pattern" of findings "emerged across studies that varied widely in design, methodology, and population demographics," Swithers reports.

The paper acknowledges that extending the results to humans from any of the studies that were conducted on animals is "challenging," and that more research is needed.

"Are diet sodas worse for you than regular sodas? I think that's the wrong question," she told CNN Health. "It's, 'What good are sodas for you in the first place?' "

A release summarizing Swithers' paper is available on Purdue's site.

ABA's statement stresses that low-calorie sweeteners "are safe," pointing out that they are "some of the most studied and reviewed ingredients in the food supply today, and their safety is supported by regulatory agencies throughout the world, such as the European Food Safety Authority and the U.S. Food and Drug Administration, as well as some of the world’s leading toxicologists."

It also points out that leading health groups, including the Academy of Nutrition and Dietetics and American Diabetes Association, support the position that low-calorie sweeteners can be beneficial in weight loss and weight management.