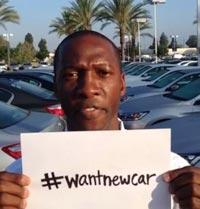 Channeling at least a small bit of the legendary Old Spice live video marathon of a two years ago, Honda is using Twitter and its Vine mobile video tool for a real-time social media project this week. Launched yesterday, the campaign promotes its Summer Clearance by asking people to Tweet their need for a new car to #wantnewcar. Honda will respond with tweets as well as personalized Vine videos on the fly.

The personalized Vine video responses started with a stop action post to @ToineEng42 who tweeted to the hashtag “my sun roof is the best duct tape sunroof in america. My 3 year old says daddy there goes the roof!” Honda replied with a rotating trophy awarding ToineEng42 precisely that honor, complete with a paper plaque duct-taped to the trophy. Earlier in the day a vine post initiated the program with a Honda dealer showing the hashtag.

@BobBorden complained that his 2004 Honda Element lacked “cool” Bluetooth and “other cool things.” So Honda’s response was having a dealer dunk his head in an ice cooler and send the customer a $100 gift certificate for iced coffee drinks.

For those wondering whether or why Honda was choosing Vine over Instagram videos, the company even has a cute video response to that. On the company Instagram account I found a great video post where a dealer announces the Vine and hashtag program. “We would have done Instagram videos but we didn’t know how to fill in the extra 8 seconds,” he says and then proceeds to stand there uncomfortably doing nothing…for the remaining eight seconds. Cute.

The program is being supported by a full-court cross-media press. TV spots show local dealers responding to tweets with cars the poster may consider. Celebrity Tweeter Neil Patrick Harris will get one of his real-life tweets asking for minivan advice answered. Print media will include weekly magazines and daily newspapers. A broad online campaign will include a USA Today home page takeover that includes the stream of live Twitter posts and Vine videos.

Honda is on to something in combining the trendiness of Vine with the basic conversational utility of Twitter connecting people to dealers and solutions.

The campaign also underscores another aspect of Vine -- its creative potential that is disproportionate to the 13 million or so active monthly users. Vine is not just a social network in and of itself, but a creative studio that ports well to other media. The thing helps marketers and publishers create compelling content that is eminently munchable wherever you can embed it. If Honda can pull off some genuinely creative responses to user via on-the-fly video creation, they would be daft not to use it everywhere they can.