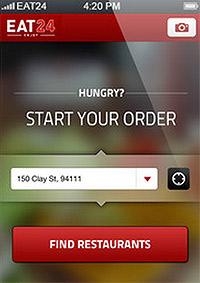 “We were swamped,” says Eat24 Media Director Amir Eisenstein. “It was unbelievable.” The online food ordering platform was one of two providers that Yelp announced last week would power its new feature for ordering directly from a listing in the popular user review and directory app. Eat24 already had over 20,000 food establishments that enable online ordering through its own site and apps. “But in the first two or three days after the press release, we got 1000 new requests,” he says. “And it is still going on -- even a few days after we were getting 200 to 400. It is like all the restaurants got an email at the same time that we were partnering with Yelp." The company says it expects the partnership with Yelp to quadruple orders to partner restaurants by the end of 2013.

Such is the power of a trusted content source at scale incorporating commerce. Eat24 has its own brand, site and app for direct ordering to its restaurant partners in 1000 cities. But the partnership with Yelp puts the company along with Delivery.com into one of the most popular dining lookup apps across platforms. Yelp also provides ratings for the Apple Maps app on almost all iOS devices.

Eisenstein says Eat24 and Delivery.com each provide Yelp with about half of its ordering connections. The initial trial of the functionality is being run in about 100 restaurants in New York and San Francisco. The locales and restaurant base are too small to deliver any meaningful indication that actual sales are rising as a results of the deal. Clearly, restaurant interest is.

Eat24 originated as a desktop solution that only moved to mobile a year and a half ago. “Today we get over 30% of our orders from devices,” Eisenstein says. “It is growing fast and we assume by the end of the year it will be 50/50.”

Ordering behaviors evolve as people move to devices. “They can order on the way home. The GPS lets people see what is around them, and there are more places to order,” he says. “Our main challenge is that everything is immediate. We have to be on top of things 24/7."

Capitalizing on its new visibility with restaurants, Eat24 announced private beta testing of the “Yes! POS,” a cloud-based point-of-sale and restaurant management system for partners. It incorporates online and offline ordering with tablet management, GPS tracking, driving directions and electronic signatures from delivery recipients. It also integrates with online ordering so incoming orders from the Web or apps are seen and confirmed at point of sale.