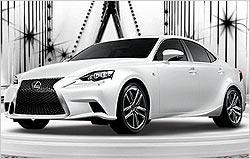 Lexus has launched a Web site and interactive platform to promote the 2014 Lexus IS sport sedan. The Flash site, "Amazing Mix," is an interactive music and video program that allows visitors to create their own “mashup” of audio and visual elements. It also puts the performance luxury car front and center.

The site enables users to execute interactive moves with their keyboards. The site, via San Francisco-based Attik, then allows visitors to mix, save and share their content via social channels.

The site’s splash page launches a film that will, per the company, be screened at auto shows and consumer car events. A mobile HTML5 version also lets users manipulate content. The campaign includes banner ads to attract Web denizens to take a detour to the site.

There’s also a promotional aspect to drive interaction: That element, with an Aug. 5 deadline, dangles a shot at tickets to the 2014 Pebble Beach Food and Wine Festival, plus accommodations and a $2,000 or a $500 cash prize.

Early in July, the company launched another keyboard-based program that enables users to customize an IS -- choosing the engine, exterior colors, interior appointments, and customization packages around such options as telematics, performance and interior and aftermarket choices.

The automaker has been talking to a younger audience since well before the launch of the 2014 IS last month. The L Studio is a online content site that has been hosting lifestyle, comedy and indie film video content since 2008. But the company is counting on the IS luxury performance car to be a major attractive force to draw younger people mulling a luxury nameplate to Lexus showrooms, away from BMW dealers, and -- by this fall -- away from Mercedes-Benz stores, which will be sporting that automaker’s own new sports sedan, the CLA.

Mike Brenner, senior copywriter at Attik, tells Marketing Daily that the new digital experience is intended to “capture the attention of a wide breadth of online users” -- and that the site, with black-and-white imagery, was meant to map to the launch campaign, aesthetically.

Todd Turner, head of auto consultancy Car Concepts, says Lexus’ trick -- and the challenge for others in the space, such as Mercedes-Benz, and Audi -- is stealing some thunder from the venerable leader BMW. "Lexus does have the bases covered with rear-wheel drive and the two platforms for the IS," he says, "and it performs well and looks nice. And it has a nice interior. But they’ll have to get the marketing and message across -- they have to make it desirable, and make people really want it. Until that happens it will be the 3-Series because nobody has to explain that purchase.”