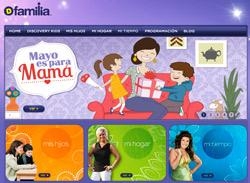 Discovery Familia is targeting Hispanic mothers and children with a new experiential marketing campaign titled “Es Para Ti” (“It’s For You”). The campaign, which consists of events with hands-on, interactive activities for moms and young children, is touring the country this summer and fall. Each event is timed to coincide with cultural festivals in cities with big Hispanic populations.

The “Es Para Ti” Tour kicked off in New Orleans with an event coordinated with the annual conference hosted by the National Council of La Raza from July 20-22, and followed up with an event in Chicago as part of the “Fiesta del Sol” on July 27-28.

At each event, moms and kids can participate in activities including prize competitions for “Artzooka,” a children’s art show; games; spa giveaways; photo shoots; and visits by popular Discovery Familia characters.

All the events are co-branded with an affiliate partner, including Cox Communications in New Orleans and Las Vegas; Comcast in Chicago, San Jose, and Houston; and Brighthouse Networks in Orlando.