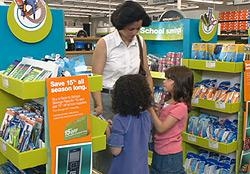 While office supply stores are typically low on the average family’s back-to-school shopping list, Staples, Office Depot and OfficeMax are hoping to change that with increased discounts and digital innovations.

Using a #stapleshasit program on both Facebook and Twitter to alert shoppers to deals, the chain is hoping that consumers will realize how broad its offerings are, even including a school uniform partnership with French Toast Official School Wear.

It’s also making deals, selling Acer Aspire laptops for $480, and tossing in free Microsoft Office 365 University (an $80 value) for those buying laptops from Dell, Acer, HP and Lenovo. It has lowered prices on tablets, notebooks, and Kindles. It’s also offering specially priced service packages from its EasyTech associates, including a $99 PC setup.

The Framingham, Mass.-based retailer is also hoping to get parents more on board with teachers’ needs, introducing a new Teachers Reward and Reward-A-Classroom program, sponsored by 3M and Newell Rubbermaid. It says teachers spend,  on average, some $360  of a year of their own funds to fully equip their classrooms, and the new programs allow teachers to customize supply lists, so parents can help keep classrooms stocked throughout the school year. Both programs generate cash-back rewards for the classroom. If parents are Staples Rewards customers, they can order products online and have them shipped directly to the school at no charge.

OfficeMax, which just reported a $10 million loss due to declining sales, is offering teachers 25% off on “Teacher Appreciation” days and rewarding shoppers with 20% off coupons for Payless Shoe stores.

And OfficeDepot is inviting parents to email them shopping lists, and promises that within 24 hours, they will respond with emails providing links for quick checkout and delivery.

In its recent forecast, the National Retail Federation predicts that 41% of back-to-school shoppers will stop at an office-supply store (versus 67% at a discounter.) Among those shopping for college students, the stores are even less appealing, with just 33% saying they intend to shop there.