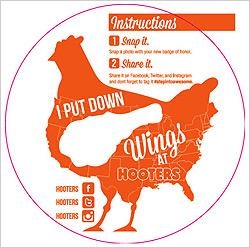 As it marks its 30th anniversary, Hooters has ramped up its social media efforts significantly to support a brand overhaul that commenced a year ago.

Privately held Hooters originated the buxom-waitresses concept and (with more than 350 locations in 44 states and 412 including those in 28 other countries) is still by far the largest of what have been dubbed "breastaurant" chains. Competitive chains with equally colorful names (like Twin Peaks, Tilted Kilt Pub & Eatery and Mugs N Jugs) have far fewer locations and fractions of Hooters' revenue, but they have collectively been seeing as much as 40% annual sales growth in recent years, as Hooters' total sales declined from about $960 million in 2007 to about $858 million in 2011 and about $850 million last year, according to Technomic estimates reported by Associated Press, Sun-Sentinel and Today.com.

Starting last August (after being acquired by a consortium of private investors in 2011), Hooters of America launched a brand reboot aimed at winning over more female customers, while keeping its core male customer base and encouraging more repeat business from infrequent visitors.

The casual dining chain is in the process of remodeling its restaurants to provide a more contemporary, open, brighter environment. And while its core menu still stresses chicken wings and other popular sports-bar fare, it now also offers lighter, healthier items such as salads. It's also reaching out to younger demographics with more "shareable" menu items and late-night offerings (like a half-price appetizer menu).

All of which is being supported by increased marketing. In February, Hooters launched a "Step Into Awesome" campaign from its new agency of record, Skiver Advertising.

Hooters now incorporates a #StepIntoAwesome hashtag in all of its marketing efforts, inviting guests to share their experiences on a dedicated microsite, StepIntoAwesome.com, as well as other social platforms, points out Hooters' digital marketing manager, Monica Afanador.

Within 30 days of the initial Step Into Awesome social campaign, more than 10,000 photos were posted to the hashtag (beating Diet Coke's #ShareYourHeart campaign by almost 2,500 photos), according to Afanador.

Skiver's digital team used research and in-the-field work, and a heavy analytics focus, to design a strategy that drives conversation around the brand by focusing on the chain's events, environment and menu -- not just the "Hooters Girls," according to the agency.

In under a year, the multi-platform approach has pushed Hooters' ranking within the NRN (Nation's Restaurant News) Social 200 Index -- which tracks restaurant chains' social efforts and customer engagement on a daily basis -- from #56 to #12, reports Skiver.

One example: In March, when "Saturday Night Live"'s Seth Myers jokingly likened Hooters' efforts to bring in more female customers via remodeled restaurants and salads to "trying to attract women to your sex dungeon by playing Adele in the background," Hooters quickly responded with a video featuring a "Hooters Girl" parodying Meyers' segment. (In addition to pointing out that the cheerleaders at Madison Square Garden wear skimpier outfits than Hooters servers, she offered to hook him up with a salad at a Manhattan Hooters.) That response video went viral (it's currently showing nearly 30,000 views on Hooters' YouTube channel).

How is all of this panning out for sales trends? Afanador reports that Hooters' same-store sales were up 0.5% in 2012, adding that the chain is "exceeding that rate this year."

Also, in May, YouGov BrandIndex reported that both female and male perceptions of Hooters have been inching up since last November. The brand's "impression" score (measuring "general positive feeling") among women had risen from -26 in August 2012 to a still-negative but better -21 as of early May, while its score among men had risen from -3 to a positive 2.

Here's a summary of some recent digital campaigns and results, from Afanador:

Digital efforts included a PSA parody video uploaded to YouTube and shared on Facebook; a Wing-O-Meter on Facebook showing updates on the number of wings consumed throughout the day; integrated "sharing" images from the brand's World Wing-Eating contest (held July 25); a video (shared on the brand's social media channels) of the reigning World Wing-Eating champion and Miss Hooters International 2013 challenging America, in the days leading up to July 29, to reach the 1 million wings-eaten goal; and a home-page ad takeover on the Fox Sports site. Hooters guests received "fill-in-the-blank" stickers (shown above) to boast about the number of wings they consumed in one sitting, and could share their personal wing counts by posting photos on Twitter and Instagram, using #StepIntoAwesome.

The campaign (which also included a national TV tag and in-store POS elements) exceeded its goal: 1,595,320 wings were consumed, according to Hooters.

* Hooters International Swimsuit Pageant: For the first time, the annual pageant included a "Miss Social" title. The contestant with the most social media activity leading up to the pageant was automatically entered into the finals, as well as receiving a $2,000 cash prize and the Miss Social title. All contestants (about 60 from around the world) were encouraged to use their Facebook and Twitter accounts to vote for them on a dedicated Miss Social landing site. The campaign generated 60,000 votes on social media platforms.

* “Back to the Beach” menu launch: To promote a summer menu tied into its origins in Clearwater, Fla., 30 years ago, Hooters guests were invited to share photos of their favorite seafood dishes via Twitter and Instagram, using #StepIntoAwesome. The best moments were also featured on the Step Into Awesome site.

* Hooters Fantasy Draft Party:  Through Sept. 5, is accepting reservations for fantasy football draft parties at its U.S. locations -- this year, through a new, user-friendly digital platform. The brand is using all of its social channels, and digital ads, to invite fans to visit the party landing page and reserve tables. Each reservation comes with an ESPN Fantasy Draft Kit, plus Hooters "season tickets" good for $400 worth of special menu and merchandise deals throughout football season.

The initial site launch promotes Chicagoland Hooters stores. Multiple free-to-play poker tournaments are being held each day, with free prizes being provided by Hooters, Heartland Poker Tour, Majestic Star Casino, Bluff Magazine, Pro Poker Gear and Blue Shark Optics. All registrants (whether or not they choose to play) get a free subscription to Bluff.