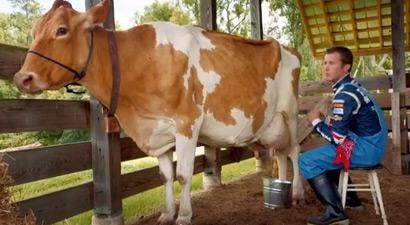 Farmers Insurance is continuing to promote its partnership with NASCAR and race car driver Kasey Kahne.

To stay on top of the NASCAR racing world, Kahne and the No. 5 team put in an amazing amount of planning and preparation. Farmers wants to celebrate this effort because they know that being properly prepared can make all the difference in racing and in life.

Kahne shot a series of digital short spots in a series called “You gotta plan to perform.” The spots, created by RPA, target NASCAR and Kahne fans and showcase the race car driver’s human side.

Throughout the season, Farmers has been showcasing Kasey and the No. 5 Farmers Insurance team's “Plan to Perform,” which is the strategy, process and preparation that enables every member to contribute to the success of the team and take the checkered flag, said Leslie Withoft, director of sponsorships and event marketing sponsorships at Farmers Insurance.

The company is “extremely active” on social media, she said.

"In addition, we have a branded webisode series "What Drives the 5" on NASCAR.com with two more to come," Withoft tells Marketing Daily.

The next installment will be released Aug. 22.

“We bring it all to life through an experiential at-track fan display that allows fans to ‘Train Like Kahne,’” she said. “Kasey, Kenny Francis and other crew members make appearances at various times throughout the season to answer fan questions and sign autographs.”

NASCAR is a great fit for Farmers, she added.

“For starters, NASCAR is the second most popular sport in the U.S. and travels to various key locations throughout the country where Farmers is helping customers,” Withoft says. “We have a good understanding of our fans and know that they have additional insurance needs compared to the general consumer.”

The fans also recognize the importance of sponsors to the sport, said Withoft, adding that in return, Farmers is able to create loyal relationships.

“We're receiving some great feedback, especially from social media,” she said. “We appreciate our fans and try to enhance their experience within the sport. It's not very different from what we offer our customers on a day-to-day basis. By working with them on insurance plans, we're enhancing their lives -- helping to protect dreams and accomplish goals.”