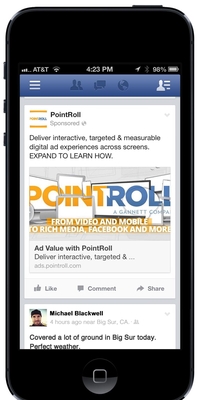 Mobile advertising represented roughly 41% of Facebook's ad revenue during Q2 2013, and the social media giant appears to have its sights set even higher. Facebook and Gannett-owned PointRoll are expected to soon announce an agreement that will bring more rich media ads to Facebook's mobile News Feed.

In June, Online Media Daily reported that rich mobile ads are more engaging on social-networking sites compared to the same ads on regular mobile sites. The article cited data from Celtra, and wrote that "rich media ads running in the Facebook and Twitter apps had an interaction rate of 55.2%, four times that of the same ads on standard mobile sites. Time spent interacting with ads was nearly double in social media, with an average of 53 seconds versus 32 seconds on other sites."

Rich media ads on Facebook's app already exist, but Todd Pasternack, PointRoll's VP of digital innovation and product strategy, argued that PointRoll's history is what will set their offering apart. "We've been doing this for 13-plus years," he asserted.

Mario Diez, CEO of PointRoll, said: "What's different about the Facebook mobile environment is that if the brands build the right type of engagement, and it is served within an environment that people are used to engaging with and interacting with, we see really good performance of the media." Pasternack added: "What's great about this is that it maintains the feel of Facebook."

While both Diez and Pasternack seemed to beat around the bush, Facebook didn't shy away from using the word "native" when talking about the agreement. Anurag Gulati, Facebook partner manager, PMD Program, said: "Facebook's native format and large photo ads in News Feed -- the most engaging part of Facebook -- sets our mobile ads apart." He added: "Mobile rich media lets brands create ad experiences that allow for multiple levels of content in one placement: videos, games, shares, etc."

Because the Facebook Exchange (FBX) isn't available on the app yet, all of the mobile rich media ads are the result of direct buys through Facebook's platform for mobile News Feed.

PointRoll and Facebook have an existing relationship on desktop, and Pasternack indicated that this agreement is part of Facebook's mobile-first strategy."We've been right there with them as they shift to mobile to make sure we would help support that strategy," he said.