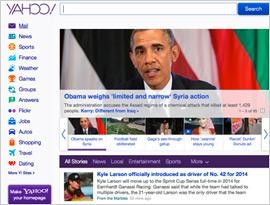 Yahoo may have topped Google in U.S. traffic in July for the first time in two years, but that won’t necessarily improve its ad results. The quality of advertising on the Web portal’s home page continued to deteriorate through the first half of the third quarter.

According to the latest ad-tracking report from Macquarie Securities, sales of oversized or custom ad units on Yahoo.com fell to 28% of total home page ads from 35% in the year-earlier period. (That marked an improvement, however, from 15% in the first half of the second quarter.) Sell-through for advertising on Yahoo’s login page also dropped to 39% from 74% a year ago, its lowest level in two years.

That doesn’t bode well for Yahoo’s third-quarter results, especially as it seeks to rebound from an 11% drop in display ad revenue in the second quarter. The company could get a boost from the relaunch of seven key properties this week, including Yahoo Sports, Yahoo Movies and Yahoo Weather.

Most of these are patterned after the home page redesign earlier this year, including an infinite-scrolling news feed that includes in-stream ads. But so far, Yahoo’s new home page has done little to boost the company’s overall ad results.

Among other Web portals, YouTube continued to perform well, with its ad base increasingly diversifying beyond the core media vertical. The share of media advertisers declined from 56% to 39% a year ago, with categories like financial services, auto, and food and beverage gaining ground in that period. YouTube’s oversized masthead unit sold out 62% of days during the first half of Q3, roughly the same as a year ago.

AOL saw mixed results in the period following three strong quarters. Oversized/custom units were up to 25% from 19% a year ago, but substantially down from 62% in the first half of Q2. Purely brand-focused ads were essentially flat at 31%, with direct-response advertising increasing to 39% from 35% a year ago.

Advertising was also off for MSN in June and the first half of July. The percentage of oversized ads dipped to 28% from 32% a year earlier, and the share of purely brand-focused advertising was less than half (17%) of what it was a year ago (38%).

Things were looking better for Amazon, a relative newcomer to home page advertising. The Macquarie report, authored by analyst Ben Schachter, noted that ads for Amazon’s own products and services have dominated on the home page through the first six months of 2013. While these ads -- mainly for its Amazon Prime and the Instant Video services -- still made up 58% of total advertising, that was down from 79% in the first half of the second quarter.

The share of more lucrative oversized units, meanwhile, increased to 11% from 3% a year ago, and from nothing in the first half of Q2. In terms of campaign objective, however, advertising on Amazon.com has continued to shift dramatically toward direct response. Purely direct-response units accounted for 61% of total advertising, up from just 12% a year ago. Advertising continues to be a small fraction of the online retailer’s overall business.

Across all the major portals, the proportion of larger, custom ads reached 38% on the home page -- up slightly from 35% a year ago, but down from 52% in the first half of Q2. Media, auto and financial services were the stronger ad categories, accounting for 18%, 17%, and 13% of home page ads, respectively.