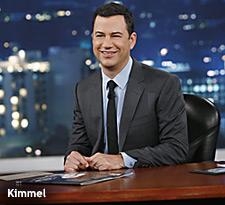 So NBC last night debuted its ten-night live quiz show “The Million Second Quiz,” which it hoped would generate more buzz than anything else on broadcast right now -- especially this morning after its much-hyped premiere -- and all people are talking about today is ABC’s “Jimmy Kimmel Live.” Specifically, they’re chattering about the YouTube sensation "Worst Twerk Fail EVER – Girl Catches on Fire!," now known as a wide-ranging video hoax that Kimmel played on the world at large, which in recent weeks was widely pumped by dozens of news and media outlets, and which Kimmel entertainingly came clean about Monday night on his show.

In the video, a woman falls over while twerking and lands on a coffee table, knocking over several burning candles and screaming as her pants catch fire. That’s where the video as we have for several weeks been enjoying it ends. Kimmel last night revealed the full video, in which he dashes into the room a split second later with a fire extinguisher and saves the day.

The ripple effect from this mindless little prank is growing by the minute. Probably the most significant takeaway from it all is that so many networks and news organizations recently made such a big deal over the video without looking into it. CNN, Fox, ABC, CBS and NBC all got duped in one way or another -- whether on morning news shows like “Today,” or talk shows like “The View” and “The Talk,” or on news programs produced by local affiliates. The list is long. The reality is that not one of them apparently thought to verify or legitimize what they were seeing before including it in various telecasts.

Can it be that Daniel Tosh and his team over on Comedy Central’s “Tosh.O” dig deeper into the true stories behind viral videos than producers from some of the country’s leading news and infotainment programs? How long will it be before stuntwoman Daphne Avalon, known to millions as Twerking Girl on Fire Caitlin Heller, turns up on “Tosh” and elsewhere to bask in her newfound celebrity status?

Coverage of this now-infamous little video -- which Kimmel said on his show was filmed two months ago and posted on YouTube without so much as a tweet about it, and which generated 9 million views without any major media fanfare -- exploded two weeks ago after Miley Cyrus positioned her rear as the new face of twerking on MTV’s Video Music Awards.

Twerking has been around for years, but it seems millions of people weren’t aware of it until Cyrus shook her behind like her life depended on it during a controversial performance with Robin Thicke that also found her simulating certain sexual activities with a big foam finger and whipping her tongue around like Jabba the Hutt at a frog-eating contest. Apparently news and entertainment writers, reporters and bloggers everywhere began scouring the Web for twerking videos and related content to further extend their aftermath coverage of Cyrus’ shocking exhibitionism and came upon Worst Twerk Fail.

Is anything about this video hoax important? Not really. It was all in good fun, and it has proven once again that Kimmel is a force to be reckoned with in late night as we head into a season that will find long-time late-night leader NBC removing Jay Leno from his throne and moving Jimmy Fallon over to “The Tonight Show.” But it’s probably worth a little serious thought, because this is yet another example of how news-gathering organizations tend to rush material into their content. In this case, a video that they thought served as a legitimate warning about the potential hazards of twerking (or simply of recording stupid behavior on video to share with the masses) turned out to be a joke staged by a witty late-night talk show host.

Interestingly, this latest goofy nonsense about twerking has everybody talking about Cyrus again, just as she has released a scorching video for her new single "Wrecking Ball" in which she prances around wearing very little except for the parts in which she isn’t wearing anything at all (those would be the shots in which she is straddling a wrecking ball). According to Vevo, that video generated more than 15 million views in less than 24 hours.

Meanwhile, NBC may or may not be smarting from the fact that Kimmel has compromised the hoped for water-cooler conversation and second-day social media buzz about “Million Second Quiz” -- but on October 5 it is going to enjoy one of its biggest nights of the year when Cyrus doubles as host and musical guest on “Saturday Night Live.”