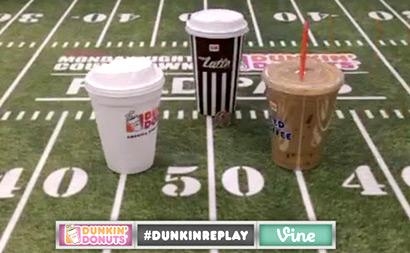 Dunkin' ran its Vine clip during ESPN's "Monday Night Football" pregame show, as one of the five-second billboard ad units that appear full-screen between segments during ESPN programs.

The animated billboard, featuring a Dunkin' latte that flips a coin in the traditional move that starts a football game, is one of four that will be seen during the NFL season.

The Dunkin' Vine TV ads are also being used to drive brand fans to Twitter to view more branded Vines. Each TV ad will promote a Vine that Dunkin' will tweet during the final quarter of each game, with the hashtag #DunkinReplay. A brand team led by Hill Holliday will choose a play from the first half and recreate it using Dunkin' products.

The ad will air more than 100 times on Fuse during the next two weeks.

The Trident Layers Vine TV spot is an extension of the brand's partnership with Fuse and Twitter, which is focused on bringing the social conversation from Twitter to TV through Fuse's "Trending 10" program--a Twitter-centric music news program that airs on weeknights.

Goal: Engage young consumers by blurring the lines between traditional and social media.

Trident worked with Grape Story and employed popular "Viners" Nicholas Megalis and Rudy Mancuso to star in the Vine ad, which is part of the brand's "revitalization" (to appeal to Millennials) of its popular 2009 "Paid in Layers" campaign.

The campaign's premise is that Trident Layers are so delicious that people would accept them as a form of currency -- and that original theme is still generating high consumer recall and engagement four years later, according to Trident.

("Paid in Layers" is recognized by the hip as referring to the first edible currency, and "paid in gum," which evolved out of the Layers campaign, has become short for getting cheap payment in return for one's work, according to the Urban Dictionary.)

Trident built the new Paid in Layers campaign off of organic conversations about the original campaign that are still going on across social channels, said Farrah Bezner, marketing director for Mondelez.

In addition to the Vine TV spot, the new version of the campaign includes a traditional 30-second TV spot from Mischievious, and a new content series featuring the "Trident Player" – a Millennial who shares his adventures as he pays  for things in Layers. The "Player" will engage consumers across social media.