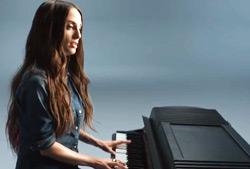 Gap gave Twitter a starring role in its first TV campaign in four years and used the social platform to release a sneak peek of its new Back to Blue spots depicting the progeny of George Harrison and Billy Joel performing two of their parents' signature songs.

The momentum on Twitter caused the brand to release the performances of “For You Blue” by Dhani Harrison and “Just the Way You Are” by Alexa Ray Joel a day earlier than expected. The young musicians chose the songs and make them their own. Danny Clinch directed the spots.

“The entire Back to Blue campaign embodies what it means to be comfortable in your own skin,” says Seth Farbman, Gap’s global chief marketing officer. “As a brand that is known for expressing itself through sight, sound and motion, we wanted to bring this idea to life through the voices of two individuals who are recognized for staying true to who they want to be.”

Analysts have been positive about the Gap’s fall merchandise line, which has a retro feel -- prominently featuring 1969 denim, jackets and chambray shirts.

“To me, honest, open and heartfelt films like these are the future of video content,” Farbman adds. “Anyone can relate to them because they’re real.”

It all started on Friday the 13th, when Gap began to reveal a series of audio content from the spots through the campaign hashtag #backtoblue with a retweet call to action.

(This reporter spied a promoted Gap tweet promising a sneak peek of the TV spots shortly after 9 p.m. Eastern time on Sunday.) Gap is using Promoted Tweets to extend the message beyond its organic fan base.

The two spots are part of the broader Back to Blue fall campaign from Minneapolis agency PMH. Extensions will appear in-store, in print, outdoor and direct mail. Social is handled in-house.

Music is in Gap's DNA and when thinking of who they wanted to cast for the campaign, the team pulled together a list of artists who embody what it means to remain true to who you want to be.

“These two individuals come from two very famous parents, and they both have been on their own journeys to discover who they are and how they can share their unique talents with the world,” said a Gap spokesperson. “They both bring to life what we wanted to achieve with this campaign.”

“While TV still reaches many people at the same time, it’s the power of social conversations that turn amazing video content from a commercial into an event,” Farbman adds.  At 3:10 pm on Monday, the Joel video had been viewed 7,770 times with eight comments and the Harrison performance 6,643 times with 25 comments. Call it a slow build.

Additional video on the Gap’s YouTube channel goes behind the scenes of the making of the spots.

In August, Gap asked consumers to create original content sharing what “Back to Blue” means to them and feature them on the YouTube channel, Gap’s Tumblr and as ads.

Neither Billy Joel or George Harrison ever appeared in a Gap commercial.