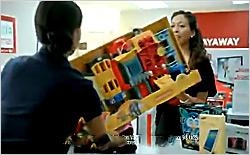 It’s beginning to look a lot like a slow retail holiday season, and the unusually compact calendar combined with a downshift in consumer shopping attitudes have retailers pulling out all stops.

Kmart’s Facebook page lit up with complaints from shoppers unhappy with the layaway TV spot that began to air on Sept. 8, a record-setting 106 days before Christmas.

That ad features a gingerbread man sneaking up on a woman working in an office cubicle and says, “Don’t let the holidays sneak up on you. Shop early with Kmart free layaway.”

Holiday decorations are also out in full force at Costco, says Bill Martin, founder of ShopperTrak, which measures store traffic at 60,000 locations in 90 countries. ShopperTrak forecasts a holiday sales increase of 2.4%, down from last year’s 2.5%. The company’s forecasts have fallen short of the U.S. Commerce Department actual sales measures for the past two years.

Sales have been rebounding steadily for the past four years and will now surpass in dollar value total 2006 holidays sales, says Martin, trying to put a positive spin on it all. “The cash value of the season should be larger than what we saw at the peak of 2006,” he told Marketing Daily.

This year’s season is as short as it can possibly be, with the window between Black Friday and Christmas Day only 25 days. Last year was a full 32 days.

Hanukkah is also problematic from a retail scheduling perspective, beginning on Nov. 28, the same day as Thanksgiving and one day before Black Friday.

The lack of a blockbuster product, with the possible exception of Grand Theft Auto V, is a contributing factor, Martin says.

“I don’t think there’s anything on fire. The announcement of the Apple iPhone 5 is not going to do it,” he says.

Toys “R” Us is offering a 20% discount to friends and family who visit stores through this Saturday and is allowing returns of gifts as far out as Jan. 25.

Last year, Target was the first to hit TV with a holiday theme spot and it aired on Oct. 7. On Friday, the Commerce Department said retail sales rose just 0.1% in August, excluding autos.