The Rubicon Project this morning released a report conducted with Econsultancy on programmatic advertising across the U.S., UK, France, Germany, and APAC. The report was released in the UK earlier today, and Rubicon gave RTM Daily a look inside the study.

While much of the talk around RTB and DSPs involves an assumed fall of ad networks, the findings suggest otherwise. While the use of DSPs has increased in the 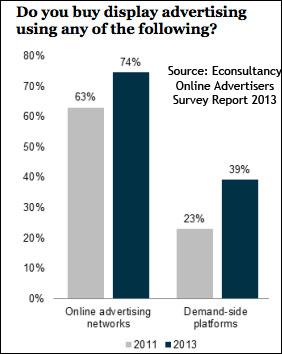 In display advertising, 48% responded that they have noticed a hike in prices. Just 22% have seen a decrease in price, and 41% feel prices have remained the same. When breaking that figure down by region, the report shows that the price of display advertising was least likely to have increased in the U.S. in the past year (35% said it increased) and most likely to have increased in the APAC region (62% said it increased).

Econsultancy's "Online Advertisers Survey Report 2013" is the third such report of a bi-annual series. In total, over 1,000 advertising professionals were surveyed in August 2013 for the report. The data in this specific report comes from the 650-plus advertisers and agencies surveyed out of the 1,000-plus total. An "Online Publishers Survey Report 2013" containing the data from the publishers point of view is expected in October.