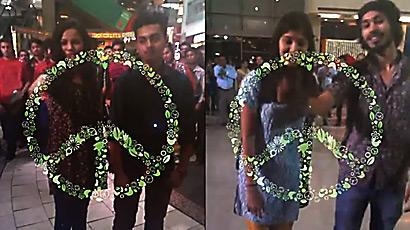 Does Jesus Christ live in a Coke machine? With all the goodwill-ambassador global programs the beverage giant has done in recent years making vending machines a conduit for reconciliation, global connections, and just impromptu acts of good will, you could almost think so.

"Coca-Cola has moved from thinking about being the best in the world to being the best for the world," said Joe Tripodi, the company's chief marketer, during MediaPost’s OMMA Global keynote on Tuesday morning. One video (it won so many Lions, the Humane Society complained) detailed such a campaign. Pakistan and India hate each other, right? The company wanted to demonstrate that, really, the people -- most people -- in those countries don't subscribe to the policies.

Coca-Cola put a machine in each country, on each side of the border. People on both sides could put their hands on a hand icon on a video screen encompassing the entire front of the vendor. They virtually touch each other and "paint" peace signs, hearts and smiling faces on the screens. The video showed how people on each side connected one to one, smiling and dancing for each other. It's a very moving video, regardless whether or not one understands it as a marketing tactic.

"We think that cultural leadership is a big opportunity for our brand and company," said Tripodi. "It's about having an opinion and a strong point of view about things people care about." He added that as the most recognized brand in world, "we can take a position in global cultural consciousness."

Tripodi said social optimism isn't new to the company, the famous 1971 “Hilltop” ad being the prime example. What's different now is how technology allows real-time connections and social change. Last year, the company did an update of "Hilltop" wherein a consumer in one country could send an unsuspecting person in another a message and a Coke from an interactive machine.

Behind all of it is the idea that great stories matter, said Tripodi. "Every example I've given is good story-telling, the heart of what human kind has done for centuries. And if you don't have a compelling story, it won’t work. Advocacy is your new sales force, and your most powerful content is shareable." He said over 80% of outreach about the brand is by fans. "We have to facilitate conversation around the brand: think big, start small and act fast. Fundamentally, it's disrupt or be disrupted, because there's no status quo. The forces of change are so intense that, unless we disrupt the marketplace, we wont be successful."