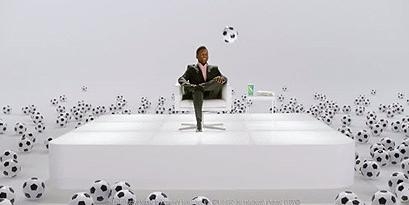 Subway, which announced in late July that fútbol legend Pelé had signed to be its new "global ambassador," debuted its first TV spot featuring the athlete last night, just before the kickoff on NBC "Sunday Night Football."

Pelé is shown sitting (quite regally) on a platform, with a Subway sandwich and soda on a table next to him, as soccer balls rain around him.

A voiceover introduces him as the newest member of the Subway team and "the greatest fútbol player ever"...upping his total career goals scored by one in real time, to 1,283, as Pelé playfully bounces one of the balls off his head.

Subway's usual fast-tempo promotional music has been replaced in this case with original bossa nova music (created by Tonefarmer), in honor of Pelé's Brazilian roots.