Sticky: Only 14% Of Online Ads Are Seen

Sticky, a company with software that uses webcams to track users' eye movements to verify whether or not online ads are actually seen, on Thursday released data which supports the argument that viewability does not equal being seen.

"Viewability" describes whether or not an ad could be seen on a page without needing to scroll down, "X" out of something, change tabs, etc. While viewability metrics would suggest that close to 50% of ads are seen, Sticky's data says it's actually just 14%.

Sticky looked at the performances of ten different brands across five different sites with two ads per site. The sites used were yardbarker.com, weather.com, realeastate.com, washingtonpost.com and instyle.com. The study dealt only with impressions that were already viewable.

Jeff Bander, Sticky's president and chief change agent, hopes Sticky's technology will help boost the number of ads that are actually seen. As publishers get more of this type of data and start to take advantage of it, Bander hopes it will bring more brand dollars online.

"About 94% of branding dollars are offline," he said. "Habit is a lot of that, but studies say CMOs are asking what it would take to move more dollars online." He added, "Brand lift and purchase intent [numbers] are always higher when more people see the ad and look at it longer. Those two measurements — of percent seen and time — have a direct correlation to brand lift, which is the main reason people are advertising brands online." 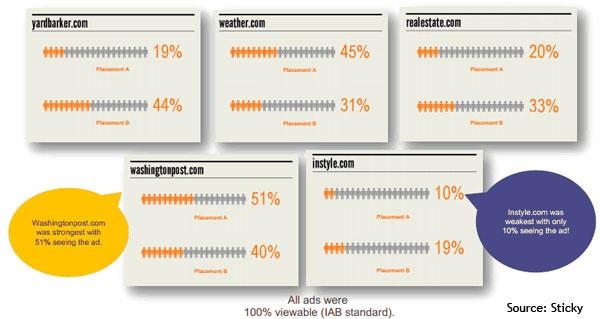