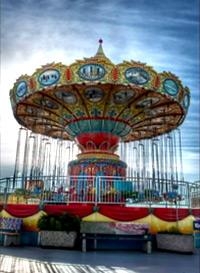 Google plans to revolutionize photography through image and video enhancements and stabilization techniques to support the mounds of photos and movies being uploaded to Google+. During a presentation Tuesday, Vic Gundotra, Google's social lead, said Google+ supports 300 million monthly active users -- up from 190 million in May. People upload about 1.5 billion photos weekly, and in the two years since the social site launched, Google has seen video uploaded rise 2-times more.

One of the new features that Google offers makes photos pop through an HDR scape filter on mobile through an app called Snapseed. It relies on pixel-edge contrast to enhance photos that can serve as content.

Mobile devices have helped people capture 600 moments in seconds, rather than 24 on celluloid in minutes. I don't have to remind you about the abundance of photos in the world today compared with a year ago. Algorithms detecting the human face can automatically boost the light in video chat Hangout sessions, blur out the background, or turn a color image into black-and-white.

Then a feature called Auto Awesome Movies that automatically turns a series of related photos or videos into animated GIFs, or short clips. Google has also created computer vision algorithms that allow people to search their photos using words, like hug, bridesmaid, snowboarding, concert, or kiss. The company added about 1,000 words to search on and bring up images without tagging the photos. You can search your photo library or network of circles.

Videos uploaded to the social network since the launch of Google+ jumped 20 fold, Gundotra said. In the next version of Google+ iOS, Google+ will offer automatic full-size picture backups and sync features. And how would you like Google+'s algorithm to determine what pictures it believes are the best of the 600 recently uploaded? It concentrates on hiding blurry images, sifts out duplicates, downplays bad exposures, pays attention to aesthetics, and looks for objects people like. It looks for recognizable landmarks and "people important in your life."