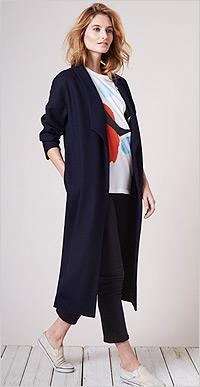 Bonobos, the e-commerce darling of men who love trendy pants, has its sights on women, and plans to introduce an apparel brand called AYR next month.

AYR, which stands for All Year Round, will kick off with denim, but expand to such wardrobe basics as cotton, silk and cashmere tops. The spring collection, due in early 2014, is set to include 75 pieces and 25 styles.

AYR is targeting “a new consumer,” brand director Maggie Winter tells Marketing Daily, with a target age of between 25 and 40. “She is very sure of herself, old enough to be established but young enough to live her life digitally. The line is as much about lifestyle as it about an aesthetic.” She's no fast-fashionista, either, says Winter, who has previously worked at J. Crew: “She's not interested in disposable pieces.”

Bonobos, launched in 2007 with just pants, now offers a full line of menswear, as well as Maide, a golf line for men, and is now available in some Nordstrom stores. But AYR will focus entirely on e-commerce, at least for now, says Craig Elbert, Bonobos VP of marketing. And like the Bonobos brand, early plans call for using word-of-mouth and social media. “Paid media advertising is something we may look at down the line, but not now.”

Ultimately, the two say, they are hoping to bring a more manageable process to these women shoppers, and that simplification is key to the brand's identity. “We wanted to edit down the choices to what can be an overwhelming process, both with our products and the shopping experience.”