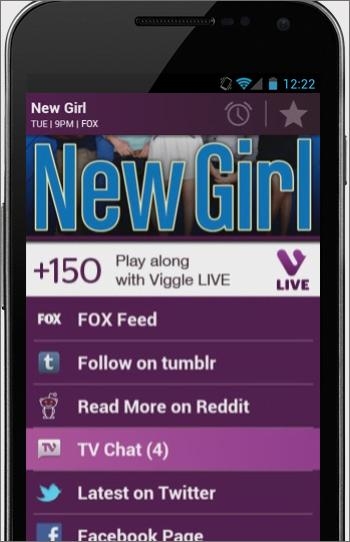 In the shadow of Twitter’s IPO and its aggressive courting of TV networks and advertisers, a host of smaller third-party mobile companies may be scrambling to prove their relevance as second-screen players that complement TV. Entertainment check-in company Viggle issued a quarterly earnings report this week showing 474,796 monthly active users in its ecosystem. Viggle is a check-in rewards program that allows users to carry redeemable points for watching TV shows. It attempts to enhance the TV viewing experience with second-screen content that complements the program.

While clearly occupying a niche, Viggle claims that its barely half a million monthly users represent a 65% increase over the 287,366 it had during the corresponding quarter last year. Still, the MAUs are but a fraction of the 3.3 million registered users the app claims for the quarter. There were just over 50 million check-ins on the system in the latest quarter. Users have redeemed $15 million in rewards since Viggle launched. The company partners with retailers like Best Buy, Papa John’s, Fandango and Hulu Plus to offer rewards against accrued points. Viggle says users spend on average 67 minutes per session with the app.

While the reach of third-party second-screen programs remains a challenge, Viggle argues that its engagement with a TV program's most loyal audience reaps unique rewards for advertisers. The company points to a Nielsen Innovation Lab study that measured the impact of a TV ad experience both on the main screen and on Viggle. Key brand metrics showed lifts ranging from 11% to 50%. The company also claims that its promotions and social sharing have proven to be effective drivers of TV tune-ins and the social reach of conversations around a program.

As a business, Viggle posted $4.3 million in revenue for the latest quarter, its Q1 for fiscal 2014. It has 22 network partners and 34 brand marketing clients for the quarter.

Viggle is part of a category of third-party second-screen apps such as Shazam, Zeebox, and IntoNow, among others, trying to capture  users who are lighting up their smartphones and tablets while watching TV. Twitter has emerged as the chief beneficiary of second screening, as it crafts deals with both advertisers and TV networks to engage viewers across screens. Facebook has been vying with Twitter on this front as well, trying to make the case that at least as many people are reviewing their Facebook feeds during prime time as are tweeting.

But this battle for second-screen dominance between the two major social network players leaves third parties scrambling to prove their continued relevance in the second-screen arena. How many viewers want to be engaged by a second-screen experience while watching TV remains an open question. Twitter's short, quick messaging about what one is watching appears to have the broadest appeal for now among viewers, perhaps because it is less intrusive than some of the ambitious early second-screen apps that hoped to immerse viewers in parallel experiences.

The second-screen space will likely consolidate as third parties try to achieve greater scale against Twitter and Facebook. In recent weeks a chief rival of Viggle, GetGlue, was acquired by TV discovery and second-screen app maker i.TV.