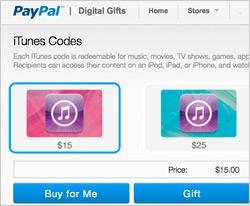 PayPal on Tuesday launched its own digital gift store allowing U.S. customers to buy digital gift cards using its payments service from third-party merchants. On board as initial partner is Apple, which is offering iTunes vouchers in different amounts.

The move comes on the heels of PayPal adding support for prepaid gift cards, letting users apply them to the purchase of products and services online anywhere that PayPal is accepted. The goal is to make it easier to use branded gift cards at e-commerce sites that otherwise might not accept them right off the shelf.

The company also recently began allowing customers to buy and use gift cards via its digital wallet app through a partnership with prepaid card network Blackhawk Network. With its new gift store, PayPal is taking a more direct approach to boosting its payments business online by setting up its own e-commerce site.

While Apple has the no-frills storefront to itself now, PayPal promises it will be adding more merchants very soon. For now, holiday shoppers are limited to buying iTunes vouchers in denominations of $15, $25, $50 or $100 redeemable for content including music, movies, TV shows, games and apps. Users simply enter their PayPal ID and password to make a purchase.

PayPal also said it would also begin hosting offers that it will promote through PayPal Digital Gifts and its Twitter account. “That’s right, PayPal users will be able to snag great deals in less than five clicks -- without even taking a wallet out of their pocket,” stated a blog post today by Patrick Gauthier, head of emerging retail services at PayPal.

Given that consumers perceive PayPal as a behind-the-scenes brand rather than as an online destination, it might take a strong promotion effort by the company to draw people to its gift store. With so many other options for buying gift cards online already, including the iTunes Store, it may have a hard time breaking through as a digital gift hub.

But if it can drive even a portion of its 137 million active users toward the store, it could add incrementally to its top line. PayPal ranked as the second-most-common payment method for online purchases after credit cards, with 41% of U.S. online adults using it in the prior three months, according to a Forrester report released Monday.