Facebook on Wednesday said the redesigned Like and Share buttons it introduced in November are proving to be popular with users. In early tests over the last month, the new buttons have delivered a 5% lift in Likes and Shares across the Web.

“This is significant, given that both buttons are viewed over 22 billion times daily. Based on these results, we've rolled out the new design to everyone and extended it to the Follow and Like Box plugins as well,” stated a Facebook blog post today. (The Like Box is an offshoot of the Like button that lets Facebook page owners promote their pages and embed a feed of content to other sites.)

Whether the lift is merely the result of a novelty factor associated with the new buttons will take more time to become clear.

The updated design ditched the familiar thumbs-up symbol for Liking something on Facebook. Instead, the Facebook “F” logo now appears in a dialogue box alongside the text “Like” or “Share.” A box (with a thumbs-up icon) above shows how many Likes or Shares a post or page has received.

The Huffington Post, Hotels.com and JustGiving were among the initial sites to see increased sharing with the new buttons. Recent data from Shareaholic underscored how much of a powerhouse Facebook is when it comes to referral traffic. In the past month, referral traffic from the social network increased 47%, accounting for more than one-sixth of an average site’s referred traffic.

Facebook in recent months has also tweaked its algorithm to show people more links to articles in their news feeds, especially from it considers high-quality sources, including theAtlantic.com. Interestingly, a recent post on that site, citing data from Newswhip’s Spike database, showed Huffington Post, BuzzFeed and Upworthy generated the most overall Likes on Facebook.

To encourage content-sharing, Facebook in August began allowing brands and other users to embed public posts from their Facebook pages on their own Web sites and blogs. In response to feedback, the company today said it will allow publishers to adjust the width of embedded posts on the desktop Web. They can now be expanded from 330 pixels to 750 pixels to customize their appearance on a Web page.

Furthermore, embedded posts on the mobile Web can now automatically scale to the appropriate width. 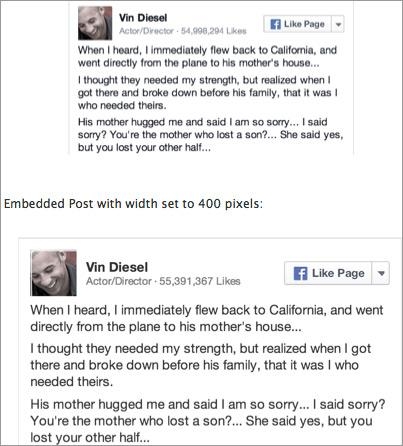