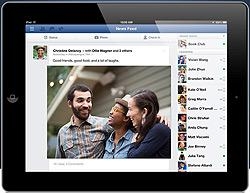 Fueled by its push into mobile advertising, Facebook this year will account for 7.4% of U.S. digital ad spending, making it second only to Google in market share.

Facebook jumped ahead of Microsoft and Yahoo in 2013 in its share of digital ad dollars, but remains well behind Google’s hefty 40.9% slice of spending, according to an updated eMarketer forecast.

The research firm had previously forecast that Facebook would remain slightly behind Yahoo this year, but the rapid expansion of its mobile business -- which in the third quarter amounted to half of its total ad revenue -- changed the outlook. Yahoo’s share is projected to fall to 5.8% from 6.8% last year.

Microsoft won’t see as steep a decline, dipping from a 6.2% to a 5.9% share. Its $2.53 billion in ad revenue includes not only sales related to its Web properties, but also from its Xbox and Skype services. Twitter may have garnered much attention because of its IPO this year, but the microblogging service this year will account for only 1% of digital ad spend.

Looking ahead, Google is expected to maintain its digital ad dominance through 2015, when it will claim 42.3% of U.S. digital ad revenues -- across desktop computers, smartphones and tablets -- while Facebook will take in 9%, Microsoft 5.4%, Yahoo, 5% and IAC, 2.2%. One looming question is how much additional revenue the rollout of video advertising will drive for Facebook in 2014 and after.

Earlier this week, eMarketer revised its forecast for U.S. mobile ad spending this year to $9.6 billion. It expects mobile Internet advertising worldwide to more than double from $8.8 billion to about $18 billion in 2013. That translates into 15.2% of all digital ad dollars spent globally, up from 8.5% last year.