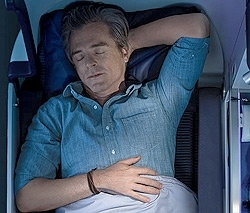 It is the largest transnational marketing campaign in the airline’s history.

The campaign coincides with an increase in the number of North American destinations it provides from Asian cities.

ANA is introducing services to Vancouver, Canada and Hanoi, Vietnam from Haneda Airport for the first time in the spring and is also increasing the number of North American destinations it services from Asian cities via Narita International Airport.

It is ANA’s increasing presence at Haneda Airport that inspired the creative behind the marketing campaign, “By Design.” The marketing also is reflective of ANA’s high quality meals, seats, entertainment, hospitality and network.

The campaign, which breaks this month, includes mass media ad placement Jan. 10 to 29, and online ad placement in February.

“Looking at our future business, we want overseas customers to recognize, understand and fly ANA,” said Ken Nishimura, ANA executive vice president. “For international routes to become a substantial driver for ANA’s growth, we are rolling-out the largest marketing promotion in the history of our organization.”

With the number of overseas visitors to Japan expected to break 10 million for the first time this year, these increases will lead to improved convenience for transit passengers for the years ahead.

The expansion, effective from March 30, will make ANA the biggest airline carrier at Haneda, offering the most international flights to and from this airport.

ANA currently offers special rates to foreign travelers under its “Experience Japan Fare,” which allows travelers to visit a variety of domestic destinations.

“With the new slots being added to Haneda, we are seeking to utilize the strengths of both Haneda and Narita airports to offer an increased level of convenience for domestic and international routes, gaining new international customers traveling between Japan and overseas destinations,” said Osamu Shinobe, ANA president and CEO in a release.