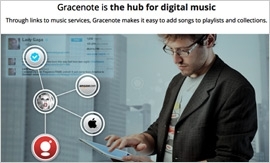 Tribune will purchase the company for around $170 million.

Gracenote has data on more than 180 million music tracks, and services 550 million music “look-ups” each day and more than 16 billion every month. Gracenote technology works with thousands of mobile apps; 50 million cars have been equipped with Gracenote. It has data for 1 million movies and TV shows across 30 countries.

Shashi Seth, president of Tribune Digital Ventures, which includes oversight of TMS, stated: "Both companies have substantial digital footprints and are well-respected leaders in their areas globally.

TMS currently reaches hundreds of millions of viewers through electronic streams of information on TV, online and in print.

Stephen White, president of Gracenote, added: "The marriage of these world-class music and video data platforms, from TMS and Gracenote, will help us reimagine how people discover and connect with music, movies and TV shows across all devices.