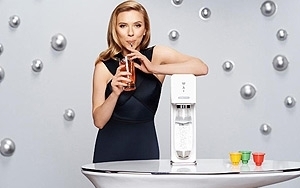 SodaStream is hoping to make a big impression during this year's Super Bowl with a new campaign featuring actress Scarlett Johansson.

The company, which sells devices and syrups designed to turn water into fizzy drinks, and its ad shop Humanaut declined to reveal specific details behind the Super Bowl spot, since the ad is still in development.

But the concept will humorously take on rivals Coke and Pepsi as the better alternative.

"The best commercials that use celebrities capture them doing what they do best, [such as] being sexy and making people laugh," said David Littlejohn, a founding partner in Humanaut, which is based in Chattanooga. The shop launched last year with the backing of former Crispin Porter + Bogusky creative czar Alex Bogusky. Littlejohn is an alum of CB+P’s Boulder office.

This is the second consecutive year that SodaStream has aired a Super Bowl commercial.

"SodaStream really does one focused media push each year, and you can't go bigger than the Super Bowl," said Littlejohn. Having a well-known personality is expected to make the ad memorable and get people talking, he says. "The concept of SodaStream is still a foreign idea to many and to have someone that people know, trust and enjoy normalize the product is a great fit."

Johansson's new two-year deal as SodaStream's global brand ambassador came organically after the actress reached out to SodaStream executives while on a film production several years ago. When the company decided that a well-known spokesperson would help elevate the brand, Johansson was the first name to come to mind.

"It doesn't hurt that she is GQ's Sexiest Woman Alive," Littlejohn jokes. Indeed, her global recognition beyond the U.S. is beneficial to the brand, say company executives. SodaStream is available in more than 45 countries, with 32% of its total sales in the U.S.

In addition to the Super Bowl spot, Johansson will be featured in print, out-of-home advertising and in-store displays.