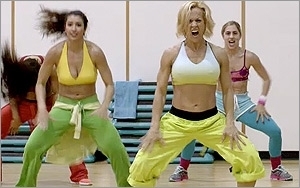 Planet Fitness is launching a campaign that continues to focus on the company’s “No Gymtimidation” approach to working out.

The spots poke lighthearted fun at fitness fanatics and the trendy, sometimes strange behaviors that fanatics demonstrate in the name of “health.” It’s these behaviors in “other gyms” that often make everyday people intimidated, or as Planet Fitness calls it, “Gymtimidated.”

"Gyms can be intimidating, but Planet Fitness offers members tons of equipment and helpful staff in an environment where they can feel comfortable and have fun for only $10 a month,” said Jamie Medeiros, Planet Fitness vice president of marketing, in a statement.

Each spot is narrated by an average Jane or Joe telling the story of “lunky” behavior they faced in zealous fitness-focused gym environments:

“Pilatatumba” parodies zumba-like jumping, twirling and dancing that no “newbie” could hope to keep up with while “Upsell” quips at the quintessential sales-y manager looking to close the deal at any cost.

“Muscle T” leaves little to the imagination as three massive muscly bodybuilders take over the gym mirror space hulking out in tiny tanks. “Ahh-Maa-Zing” teases gyms that look and act more like a nightclub, with women in tight shorts exhibiting the perfect posteriors.

The new campaign broke Jan. 14 during “The Biggest Loser,” on NBC; Planet Fitness is title sponsor for the show. The spots will also air during "The Voice," "Chicago Fire," "Live with Kelly & Michael" and "Jimmy Kimmel."

Planet Fitness also is hosting “The Biggest Supporter” sweepstakes on Twitter and Instagram, which encourages fans to tweet or post special messages of support for their favorite contestant and use the special hashtag #PFBiggestSupporter for the chance to win a variety of prizes.

Four fans who participate in the sweepstakes will be randomly selected to win the grand prize, which includes tickets to “The Biggest Loser” season finale in Los Angeles on Feb. 4 for themselves and a guest, round trip airfare, accommodations at The Mondrian Los Angeles and a Hollywood Tour.

In addition, 25 people will receive a “Pound of Support Pack” which includes a Planet Fitness T-shirt, a free three-month membership to Planet Fitness and other prizes.