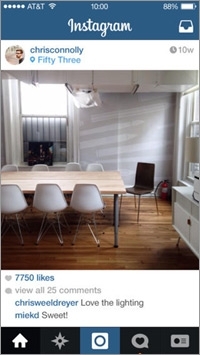 Facebook was the No. 1 app overall in 2013, but its photo-sharing subsidiary Instagram was the fastest-growing app among the top 10.

With an average of 103.4 million unique visitors last year between January and October, Facebook had easily the largest U.S. audience of any app, with traffic up 27% from 2012. But that growth rate paled in comparison to Instagram -- acquired by the social network in 2012 for $1 billion -- which saw its app audience surge 66% to 32 million last year, according to Nielsen data.

That’s partly a result of starting from a smaller base, but the comparison with Facebook won’t do anything to dispel the growing perception that the growth in social media -- especially among teens -- is shifting to single-purpose or messaging apps, including Instagram, Snapchat, Whatsapp, Whisper and others.

Instagram also outpaced Twitter, the No. 10 app that grew 36% to 30.7 million last year. How Instagram’s growth translates into ad sales should start to become clear this year, with advertising in the app just launched at the end of 2013. In a recent research note, JPMorgan analyst Doug Anmuth suggested, however, that advertising will continue to roll out slowly on Instagram this year, not contributing significantly to Facebook’s overall revenue.

Close on Instagram’s heels in terms of growth was Apple’s Maps app (No. 8), which increased its audience 64% to nearly 32 million. That gain highlights Apple’s success in luring back irate users after its disastrous launch in iOS 6 in 2012. That isn’t to say it can match the cross-platform reach of Google Maps, which last year boasted 68.6 million uniques, reflecting 14% growth.

Indeed, Google apps -- which also include Search, Play YouTube and Gmail -- made up half the top 10 apps in 2013, pointing to the ubiquity of the Android OS. The Google platform ran on more than half (52%) of U.S. smartphones in November, according to the latest market share data from comScore.

The increase in mobile adoption overall drove down desktop traffic in 2013 compared to the prior year for each of the top 10 Web sites, according to Nielsen. Google -- the No. 1 site, with an average online audience of 164.8 million last year -- saw traffic drop 6%, while Facebook’s fell 16% to 135 million, and Yahoo’s 9% to 129.8 million.