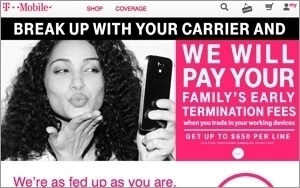 T-Mobile’s push to be the “Uncarrier” of the wireless world is having an effect, particularly at AT&T’s expense.

According to YouGov BrandIndex’s consumer perception measurements, T-Mobile has closed the gap between itself and AT&T, particularly when it comes to purchase consideration.

Since the beginning of 2013, AT&T’s purchase consideration score (an answer to the question, “When you are in the market next to purchase items in this particular category, from which of the following brands would you consider purchasing?”), dropped from 25% to 23%, while T-Mobile’s score has increased from 10% to 13%. (YouGov BrandIndex did not have scores for Verizon Wireless or Sprint.)

“If you look at their [subscriber rates and consideration numbers], it’s working,” Ted Marzilli, CEO of BrandIndex, tells Marketing Daily. “From that perspective, I’d still keep doing it. But the other guys aren’t just going to sit back and let them take their customers.”

T-Mobile is also increasing its perception on other consumer measurements as well. Since spring 2013 (when T-Mobile announced it would sell the iPhone at rates cheaper than competitors and without a contract), T-Mobile’s value score was three points higher than AT&T’s. (2 vs. -1, where a score of 0 indicates an equal amount of positive an negative feedback). T-Mobile’s Buzz score, which measures whether consumers have heard anything positive or negative about the brand, is also higher than AT&T’s (13 vs. 10), no doubt in part to T-Mobile’s aggressive marketing of late.

“The ‘Uncarrier’ position is appealing to a lot of consumers,” Marzilli says. “Their satisfaction and purchase consideration scores are saying they’re happier and more people are considering their brand.”

AT&T continues to lead T-Mobile when it comes to customer satisfaction, though T-Mobile’s scores are increasing (from 3 to 5), while AT&T’s are holding steady at 7.