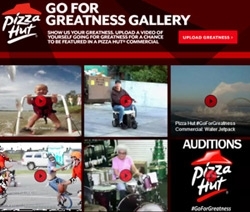 While Pizza Hut isn't advertising during the Super Bowl, it's going to be plenty visible on television during the day of the game.

In fact, the brand will run a total of nine new 30-second spots on the Fox network on Feb. 2 prior to the start of the game, before the ads begin airing on other national networks and cable stations, confirms a spokesperson.

The commercials will mark the start of a new, year-long "Go for Greatness" campaign to support Pizza Hut's new Hand-Tossed Pizzas, which feature a lighter, "one-of-a-kind" crust, says the brand.

One spot, which is being created for airing right before the Super Bowl, will feature a consumer chosen based on live auditions in New York City during Jan. 29 and 30.

The auditionees will demonstrate their unique or amazing talents. Carolina Panthers quarterback Cam Newton — Pizza Hut's new "ambassador of greatness" — will be on hand for the auditions. Pro football TV host Trey Wingo will emcee the event.

Five of the nine spots that will air on Game Day are already viewable on the brand's Go for Greatness YouTube page.

These feature footage from real videos posted on YouTube, courtesy of the social network and the originators. Examples include a granny demonstrating her drumming skills,  teens playing unicycle football, a baby waterskiing, a guy doing wheelies on a motorized beverage cooler, and a "human dolphin" using a water jetpack to leap out of the water.

Between now and Feb. 28, the brand is also encouraging fans to enter (on the same YouTube page) short, original videos showing themselves "going for greatness."

Pizza Hut hopes to use some of the entries in ads to run during the year.

Pizza Hut will showcase some of the video submissions online, and will use hashtag #GoForGreatness to track activity across social media channels.