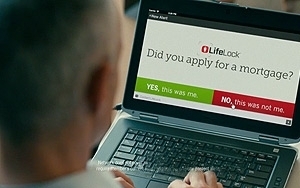 With credit card and other security breaches topping the news for the past several weeks, the time is right for an identity protection service to hit the airwaves with a new campaign. Enter LifeLock.

Although the timing is mostly coincidental, LifeLock this week is launching a new national campaign depicting how its services can allow consumers to have peace of mind when it comes to their identity and information. The new effort from Lowe Campbell Ewald includes television commercials and a redesigned company logo.

In the commercials, LifeLock demonstrates how deeply technology has become ingrained in our lives, showing people using their smartphones in elevators (and absentmindedly getting off on the wrong floor), shopping online and banking online. A voiceover salutes those using technology often, calling them “casual online banker,” “expert photo sharer,” and “380-friend follower.” But it claims that identity theft is one of the fastest-growing crimes in the country. “The thing is you live in a digital world, and you’re not turning back. And that’s okay,” the voiceover says. “Shop, follow, post, browse and stream. Knock yourself out. Because while you do your thing, we’ll be here at LifeLock, doing our thing.” The campaign encourages people to get LifeLock protection and “Live life free.”

The campaign intentionally avoids taking a dark tone, depicting the dire consequences of not protecting one’s identity, says Mark Simon, chief creative officer at Lowe Campbell Ewald. “I’m a believer that freedom is a more powerful motivating factor than fear,” he tells Marketing Daily. “[Security breaches] are the consequences of living in a connected world. We want to tell people: ‘You don’t have to go back to the old ways, and [you] can live life as you’re accustomed to without fear.’”

Still, the campaign acknowledges that with hackers becoming more sophisticated, consumers can benefit from the extra layer of protection LifeLock provides. “A lot of us feel our credit card companies are going to protect us,” Simon says. “LifeLock is going to protect you in ways they can’t.”

The campaign is the first for the agency since winning LifeLock’s account last October. Since then, security breaches at Target, Neiman Marcus and most recently, Michael’s have been a constant part of the news cycle. Although the campaign was not timed to capitalize on those incidents, it is intended to acknowledge that more breaches are likely as hackers become more sophisticated.

“With each one of these breaches, it reinforces the message” of the campaign,” Simon says. “We’re going to see more and more of these as life goes on.”