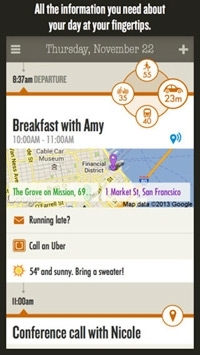 In its latest bid to bolster its mobile talent, Yahoo has acquired Incredible Labs, the startup behind personal assistant app Donna. The iPhone app was designed to anticipate users’ needs, especially around scheduling, and notify them about when to leave for an appointment or email contacts when they’re running late.

Under the Yahoo deal, first reported by TechCrunch, Donna will be shut down and five of the seven-member Incredible Labs team will join the Web giant to work on Yahoo Mail. Company co-founder Scott San Filippo will not be part of the group heading to Yahoo.

In a statement issued Thursday, Yahoo said: “When we met with the team from Incredible labs, it was an immediate fit. As we look to the future, our visions are aligned in that we think technology should be smart enough to think for us.”

The latest redesign of Yahoo Mail in October triggered a user backlash over everything from the new look of the interface to technical bugs to the elimination of favorite features. So it’s not so surprising that the company would put the Incredible Labs team to work on Yahoo Mail.

Exactly how their knowhow or technology will be incorporated into the service isn’t clear. But it’s not hard to imagine some “smarter” form of Yahoo Mail that adapts some of the virtual assistant features of Donna.

The acquisition comes just a day after Yahoo snapped up Tomfoolery, a startup launched by AOL and Yahoo veterans that makes the Anchor communications app for the workplace. That app was also shut down and its four-member team has joined Yahoo.

The company certainly hasn’t slowed its pace of acquisitions in 2014, with four deals already in January after making 28 last year. In Yahoo’s fourth-quarter earnings conference call this week, CEO Marissa Mayer said the company would “continue to opportunistically look for talent acquisitions as we continue to grow, particularly our technical workforce and our mobile workforce.”

Mayer also noted that Yahoo now has 400 million monthly active users, or about half its total active user base, up from 150 million 14 months ago.

The company expects to close the Incredible Labs purchase in five days, at which time Donna will be removed from the App Store.