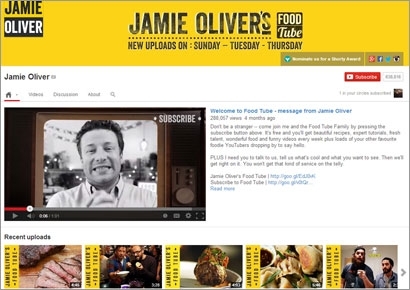 Google points to three key strategies that allowed Jamie Oliver to grow his community of food lovers to 600,000 subscribers, but for some geeks the integration of science to learn how PH balances in food change color could very well do it. Oliver ran a 30-minute live interactive show that showcases the latest cooking talent on his channel, and gives subscribers a look into his daily life.

More people watch YouTube then cable networks. It turns out that YouTube is No. 1 in reaching 18- to-34-year-olds, but not all engage similarly on YouTube. Music, comedy and film and animation are the top three genres that most women in this category watch, whereas music, gaming and comedy are the top three for males.