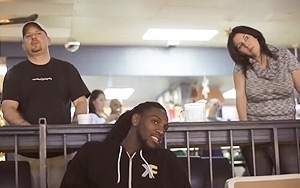 Sprint is giving NBA fans a chance to get to know the players behind the on-court heroics through a new video series that follows several of them and their off-the-court passions.

The weekly Web series “The Crossover” features individual NBA players giving a behind-the-scenes look at their personalities, family and passions outside basketball (as well as what has driven them to reach the top of the game). In all, 30 players will be featured in the three- to-five-minute segments running through May 29.

“Fans have told us they were interested in getting to know players as people,” Sprint representative Dave Mellin tells Marketing Daily about the series. “They wanted to see the human side of NBA players, so that’s where we started and we wanted to provide fans with content from an NBA player that that weren’t get from other media outlets.”

The first four players featured are Boston’s Jeff Green; Denver’s Kenneth Faried; Jared Dudley of the Los Angeles Clippers, and Sacramento’s Jimmer Fredette. Shot by directors such as Coodie and Chike, Madbury Club and Carl Ford, each segment will be accompanied by biographical information about both the player and the filmmaker.

In Faried’s video, for instance, the player known as “Manimal,” explains how he got his nickname (it came from his friends, even though he wanted something different) and how he was driven to play basketball at his park, despite the dangers of the rough neighborhood where he grew up. Shot in a bowling alley, Faried also talks about how he and his friends could go to the bowling alley next to his house to clear his mind. He also discusses the similarities between bowling and basketball, particularly when it comes to form.