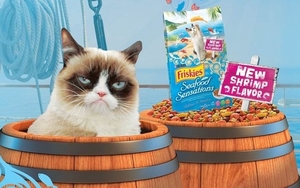 Friskies will donate an additional meal (up to 25,000, for a total donation of 50,000 meals) for every use of the hashtag #HolyShrimp across social media platforms between March 7-9.

Grumpy Cat, an Internet sensation, was one of the stars of last year’s Austin-based South by Southwest Interactive festival. This promo links the Friskies brand to the cat's appearance at this year's festival.

Later on Friday, the S.S. Holy Shrimp Boat will leave port once more for a city sail of Austin that brings Grumpy Cat to the Mashable House for a special meet-and-greet with her closest fans.

Purina previously enlisted Grumpy Cat in a holiday promotion that resulted 600,000 cans of food being donated to animal shelters. Grumpy Cat starred in a holidays-themed video called “It’s hard to be a cat at Christmas” which has been viewed more than 2.6 million times on YouTube.

The cat, whose real name is Tardar [sic] Sauce and is owned by Tabatha Bundesen, was signed to be the official "spokescat" for its Friskies brand in September. The cat's first official duty was a live appearance at the annual Friskies cat video contest awards on Oct. 15, where she received a lifetime achievement award.