Half Of U.S. Listeners Tune Into Online Radio 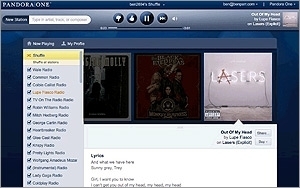 Online radio is making big gains in audience share, with Pandora leading the way, according to the latest figures from Edison Research and Triton Digital, published in the annual “Infinite Dial” report, based on a national survey of 2,023 people conducted in February.

As might be expected, usage numbers are much higher for teens and younger adults, with 75% of Americans ages 12-24 listening to online radio in the last month, compared to 50% of Americans ages 25-54 and 21% of Americans 55+. The weekly figures for the same age groups were 64%, 37% and 13%, respectively.

Of special note for advertisers: 75% of respondents who listen to online radio on a weekly basis said commercials are a fair price to pay for free programming -- roughly comparable to 80% for weekly AM/FM listeners. In fact, online audio ads were viewed as less annoying than broadcast counterparts, with 47% saying AM/FM radio ads are more intrusive, versus 30% for Internet audio ads.

Turning to specific platforms, 31% listened to Pandora in the last month, and 22% in the last week. For Clear Channel’s iHeartRadio, the monthly and weekly figures are 9% and 5%, respectively. Apple’s new iTunes Radio, launched in the second half of 2013, is off to a good start with 8% of Americans age 12 and up listening in the last month, while Spotify garnered 6%.

No surprise -- smartphones loom large in the latest research: 61% of Americans ages 12 and up now own a smartphone, increasing to 80% among adults ages 18-34. This is enabling a whole range of associated behaviors, such as in-car listening: 26% of mobile phone users are connecting devices to vehicles to listen to digital audio, including Bluetooth links, up from 21% last in 2013. The proportion rises to 43% of Americans ages 12-24 (compared to 27% of Americans ages 25-54 and 10% of Americans 55+). Overall, 66% of online radio listeners say they tune in via their smartphone.

Although digital is growing fast, broadcast radio still dominates overall audio consumption -- with 75% of consumers saying they turn to broadcast stations to discover new music, versus just 48% for Pandora. Broadcast also prevails in in-car listening, with 58% of respondents saying they listen to AM/FM “almost all of the time” or “most of the time,” versus just 6% for online radio.