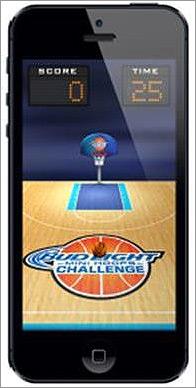 ning the madness and extending the Bud Light Hotel franchise to Dallas for the NCAA basketball tournament finals. The beer company hosted a similar promotion connected to the Super Bowl earlier this year.

For the past five years, BudLight Hotel has been the premiere party destination at Super Bowl, says Rob McCarthy, vice president, BudLight.

"Now we’re expanding BudLight Hotel and bringing the best parties and first-class entertainment to a different stage," McCarthy says in a release. "With an outstanding music and entertainment lineup, we expect Bud Light Hotel Dallas to be the best place to enjoy all the action of the weekend.”

Through March 23, consumers ages 21 and older from across the country have the chance to win a trip to stay at Bud Light Hotel Dallas by participating in Bud Light Mini Hoops Challenge tournaments at local bars or restaurants or through Anheuser-Busch’s Fan Zone smartphone app.

Mini Hoops Challenge players have 35 seconds to bounce as many mini basketballs through the basket as possible. The winners of these tournaments will earn the Ultimate Hoops Experience, including a trip to Bud Light Hotel, where they’ll have an opportunity to play on a life-sized version of the Mini Hoops Challenge.

Fans can also attempt to win a trip to Bud Light Hotel Dallas by playing a virtual version of the Mini Hoops Challenge on Anheuser-Busch’s Fan Zone smartphone app. The game works the same way as the actual Mini Hoops Challenge, offering players 35 seconds to “flick” virtual basketballs into a hoop. Eligible players who score 30 or more points are entered into a drawing for the Ultimate Hoops Experience.

Contest-winning fans from all over the country will descend on Bud Light Hotel Dallas to enjoy all the weekend action in special areas like the Bud Light Platinum Lounge and the Bud Light Lime Poolside deck. The redecorated hotel will feature Bud Light-branded signage, pillows, soaps, and key cards.