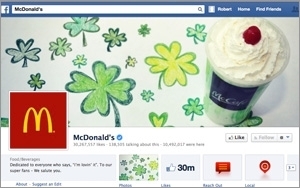 To target consumers in local markets, national brands increasingly look to social media before more conventional channels, such as email, sponsorship, or newspapers.

In fact, nearly 60% of franchise businesses (57.9%) use their Facebook page for local promotions, according to a new report by BIA/Kelsey, which was commissioned on behalf of Web marketing firm Surefire Social.

That is significantly more than the 36.8% of national brands that use email marketing -- and the 43.2% that use newspapers -- to plug local promos.

“Businesses are spending a lot more time and wallet share on owned and earned media, and the popularity of Facebook pages may be the best example of that,” said Jed Williams, vice president of consulting and a senior analyst at BIA/Kelsey.

What’s more, 37.9% of national brands now rely on Google sites, including Google Plus Local and Google Maps, to reach consumers at the local level, while 32.6% count on Twitter to go local. Considering Google’s less-than thriving social strategy, the search giant’s sway among national businesses is especially impressive, according to Williams.

“Google has effectively connected local businesses’ [investment in Google Plus and Maps] to SEO rankings,” Williams said on Wednesday. “Businesses, therefore, have a real incentive to invest in Google Plus.”

More broadly, three out of the top five (and 12 of the top 20) media channels used by franchises for local advertising and/or promotions are digital, according to BIA/Kelsey’s Local Commerce Monitor study.

Overall, locally targeted media and marketing spending by national businesses, including brands, franchises, dealer and manufacturer networks and other multilocation enterprises, will grow from $45 billion in 2014 to $53 billion in 2017, BIA/Kelsey projects. If accurate, that will represent more than one-third of the total local advertising market.

Last year, social media advertising spending was expected to reach $4.6 billion -- up 35% from $3.4 billion in 2012, according to a recent estimate from ZenithOptimedia.

This year, seven out of 10 marketers expect their companies to increase spending on social media, according to a recent survey of 328 marketing professionals conducted by Decipher on behalf of the Word of Mouth Marketing Association and the American Marketing Association.