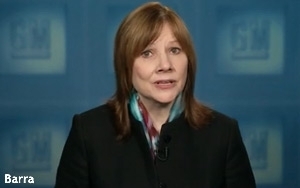 Say what you will about General Motors’ and the National Highway Transportation Safety Administration’s total disconnect a decade ago around faulty ignition switches, the automaker seems to have moved pretty fast on saying sorry and trying to fix the problem.

On Monday, GM issued a proactive recall of some 1.5 million Buick Enclaves and GMC Acadias, Chevrolet Traverses, Saturn Outlooks and other vehicles to fix airbag problems. On that day, new CEO Mary Barra, in a trial by fire, appeared in a video message to assuage employees and everyone else with an effort at transparency, saying the Department of Justice is involved, and that GM is cooperating and making the recall itself "as smooth as possible."

On Tuesday, she named Jeff Boyer to the newly created position of VP, global vehicle safety, with responsibility for the safety development of GM vehicle systems, confirmation and validation of safety performance, as well as post-sale safety activities, including recalls.

Although the recall story is political fodder and a marketing challenge, the message should, indeed, be delivered to employees first because company morale and her credibility as leader are at stake, says David Johnson, CEO of branding and PR firm Strategic Vision (not to be confused with the Tustin, Calif.-based market research firm of the same name). "In crisis situations, companies need to talk to investors and consumers but one big mistake they make is that they forget during crisis to talk to employees as well. They represent your company, and reporters will observe how employees react," he says. "And they talk, too. They are your best ambassadors."

In the video, Barra -- in addition to acknowledging the criminal and regulatory clouds on the horizon -- talks about the company's expeditious actions, such as the new recalls, new safety czar; the establishment of dedicated social media staff around the problem; a dealer training program for the recall, and customer loaners and cash. She says that as a member of the GM family and "as a mom with a family of my own," the issue hits home.

Says Alec Gutierrez, senior market analyst of Automotive Insights at KBB.com: "She is saying all the right things: she's apologizing and has stressed that GM today is different from one that produced Cobalt and the other vehicles involved in the recall." He also says that sales and search activity for GM vehicles at Kelley Blue Book haven't swung one way or the other. "From our perspective, it looks like business as usual. That's a good sign in that we are at the peak in terms of these news stories."

He tells Marketing Daily the company has a leg to stand on because its new vehicles are worlds removed from previous-generation legacy models. "It doesn't give them a pass -- depending on what they knew and when -- but their quality and engineering has come so far it's just not the same company today."

It is probably also fortuitous for GM, timing-wise, that Toyota has momentarily shoved the Detroit automaker off of the headline banner with its own news: its agreement to pay $1.2 billion, the biggest criminal penalty ever imposed on a car company in the U.S. (per U.S. Attorney General Eric Holder) to end the Justice Department’s criminal probe into its handling of safety problems.

But Jack Nerad, senior market analyst at Kelley Blue Book, said, in a statement, that GM doesn’t enjoy the wiggle room another brand has since people have not likely forgotten that the government stepped in to bail it out. "The fact that GM was rescued by the American taxpayers makes a resolution that is satisfactory to the average person on the street even more imperative than if such an issue arose in another company."