Acronym-ity: VRM Are The Three Most Important Letters You've Never Heard Of 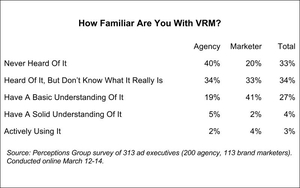 Nearly a decade ago, a fundamental shift began reshaping Madison Avenue as the world's biggest brands realized their relationship with consumers was changing and that digital media was shifting the power of communication from the marketer to their customers. Big brands began adopting language like "boss," "king" and even "god" to describe the "consumer 2.0." The rhetoric crested in the fall of 2006, when uber marketer Procter & Gamble chief A.G. Lafley told the industry it was time to "just let go." More than seven years later, it now seems like it was all a bunch of lip service, and that instead of ceding genuine control to the consumer, the world's biggest marketers -- aided and abetted by sophisticated new data, analytics and technology -- have simply figured out even more ingenious ways of hijacking the attention, data and pocketbooks of consumers.

During this same period, a quiet revolution has been taking place among a group of academic thinkers and developers to create a much more holistic marketplace -- one that truly puts the consumer in charge of how, when, where and why they consume brands.  And just like the world of ad tech, it's got its own acronym -- it's called VRM -- and surprisingly, few people on Madison Avenue have ever heard of it. But that may be okay as far as some of these developers are concerned, because their end-users are not big businesses, but average consumers. VRM stands for “vendor relationship management,” and it is the exact opposite of the concept the industrial marketing world likes to use to describe its approach to consumers: CRM, or “customer relationship management.”

“The idea from the start has been to encourage development of tools that make customers both independent and better able to engage,” explains Doc Searls, and author (The Intention Economy) and the de facto leader of the academic movement, codenamed “Project VRM,” which he operates out of the Berkman Center for Internet & Society at Harvard University.

Despite a groundswell of activity from its own cottage industry of developers, and some bouts of broader attention from the mainstream marketing world, Project VRM has largely been operating in the shadows, or at the very least, on the fringe of marketing. Some major agency groups have units within units -- typically small venture capital groups exploring next generation ad tech start-ups -- that have been tracking it. (You can see the handiwork of one, MDC Partners KBS+ Ventures’ “Intent-Based Landscape” here.) But when I asked the president of one of the largest independent media agencies if he'd ever heard of VRM, I was met with a blank stare. When I prompted him, “Vendor Relationship Management,” he feigned recognition, replying, “Isn't that some kind of consultant?”

To benchmark VRM's awareness on Madison Avenue,"MediaPost Weekend" asked the business intelligence researchers at Perceptions Group to field a quick study earlier this month, and the results indicate that while a majority claim to have heard of the concept, few have any real sense of what it is. And only a tiny percentage say they are currently using it in some form. Interestingly, marketers seem significantly more aware and informed about it than agencies, meaning Madison Avenue has some catching up to do. When asked how important VRM would be to their company in the “year ahead,” more than half (56%) of respondents said “very” or “somewhat” important, and when asked the same question for 2017, the percentage shot up to 76%.

Despite pockets of buzz over the seven years Project VRM has been active, the group recently has a bout of soul-searching on its listserv, prompted by a question from Searls about whether it should change its name and identity altogether. Among the suggestions from the community were changing the V-word to “value” from “vendor,” but in the end Searls says it will likely stick with the original version and simply focus on doing a better job of spreading the word.

Because the concept still seems so abstract -- if not antithetical -- to many on Madison Avenue, "MediaPost Weekend" plans to begin profiling individual players in the VRM sector over the next several months in an effort to showcase their ideas, business models, and methods for shifting the leverage in marketing from brands to consumers. Stay tuned for more soon.