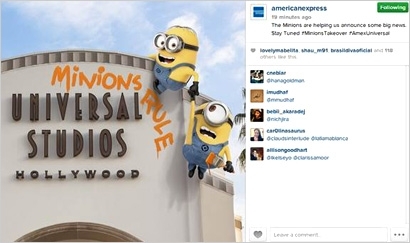 American Express has been playing imaginatively with Instagram of late. A few months back it turned the feed over to a member to record their uses of the card in everyday life under the nom de plume of CF Frost. And this week the brand let the minions take over -- well, the bug-eyed minions of "Despicable Me" fame.

In a series of Instagram posts, the familiar minions appear in a host of locations in and around Universal theme parks. The placement is a bit ironic because it heralds an expanded global partnership between Amex and Universal that in part includes product placement in Universal film properties. Part of the partnership gives the charge card brand first opportunity among payment services brands to be included in Universal properties. The deal reaches even farther than that, however, into exclusive entertainment experiences to cardmembers, co-marketing plans, etc.

The Instagram piece is especially fun. It speaks to the ways in which brands can leverage these social media channels in simple ways that incorporate entertainment content. Brands could do worse than partnering with entertainment entities to let beloved characters occasionally “invade” their space. After all, what is interesting about social media flow is that they create this shared space that can be “visited” and kidnapped and feature cameos and creative mashups that allow a brand to have fun with themselves and even with other brands.

We like to talk about how social media channels let brands have conversations with customers. But maybe the best opportunity they have here is to demonstrate their humanity simply by lightening up about themselves.