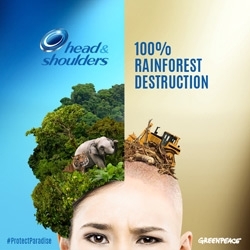 In its long-standing campaign to preserve rainforests, Greenpeace’s latest battle charge is against Procter & Gamble. Based on results from a year-long investigation into the company’s palm-oil partners in Indonesia, it’s calling the company out for what it says are orangutan-killing practices, and hoping to push P&G into using sustainable palm oil in its soaps, shampoos and lotions.

So far, the activists seem to have the upper hand. Following the arrest of Greenpeace activists for using zip lines and rappelling gear to hang banners around P&G’s Cincinnati headquarters, social media chatter has been intensifying. And retail giant Safeway -- through the New York State Common Retirement Fund, which had been exerting pressure for changes in palm-oil policy -- just announced it would move quickly to use 100% sustainable oil in its private-label products.

“P&G is buying palm oil linked to rain forest destruction, by relying on a certification team,” Amy Moas, Greenpeace senior forest Campaigner, tells Marketing Daily. “And that’s not enough. We have evidence that these providers are allowing rain forests, including tiger habitat, to be destroyed.” She says the group has even found remains of orangutans, buried by humans.

So far, she says, more than 1 million consumers have signed pledges to side with Greenpeace on this issue. “And we’ve had a great response on Twitter, with several of our hashtags trending. People are posting everything from pictures of their cats, like “My kitty stands with tigers,” to requests for P&G to clean up its act.

While it’s too soon to see if the uproar will affect sales, experts says brands are increasingly vulnerable to fallout because of social media. “When consumers see chatter on their newsfeeds about Greenpeace’s antics, it does have an impact,” Jennifer Sheehy, VP/ crisis prevention & management for Cone Communications, Boston, tells Marketing Daily. “They can find kindred spirits, and activist groups like Greenpeace use these channels very well.” After the arrest of the Greenpeace activists, she points out, “there was a significant spike in online conversations.”

Increasingly, she says, consumers are paying attention. “Our research has shown 71% of U.S. shoppers do consider the environment when shopping, and that nine out of 10 global consumers say they would boycott a company for having destructive environmental policies. As many as 50% say they have done so. So yes, consumers are more caring than they used to be.”

That said, she points out that the complexity of some sustainability issues are often baffling to the typical consumer. “We just did some research on GMOs in food, and found that three out of five U.S. consumers are on the lookout these products. But many don’t even know what that means.”

Greenpeace has already proven itself masterful in exerting social media pressure. When its 2008 Dove Onslaughter went viral in 2008, it more or less hoisted Unilever on its own petard, resulting in significant shifts not just in Unilever’s sourcing policies, but throughout the industry.

“If companies like Unilever, L’Oreal and, more recently, Colgate-Palmolive can buy sustainable palm oil,” adds Moas, “P&G can do it, too. We are asking P&G to step up and be a leader, and buy its palm oil in the right way.”

P&G did not respond to Marketing Daily’s request for comment.