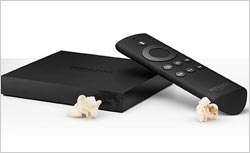 While the overall announcement of a streaming media box from Amazon was not surprising, it was in the details that things got interesting. They nibbled at without necessarily striking at the heart of Apple TV’s market leadership.

There is no way around how formidable Amazon’s play is here, likely more so than Google’s ingenious Chromecast. Google’s stick is brilliant for its price point and device-based functionality. But Amazon just deftly called attention to how old and creaky Apple TV is.

I am disappointed that FireTV is neither free or discounted for Prime members. That seems to me to have been an easy way Amazon could draw some blood from Apple. Still, the robustness of the Amazon media ecosystem is now apparent after a rocky early start years ago. I find myself relying on the Prime Instant Video account more and more as it combines Netflix-like reach with both subscription and a la carte content access. In some ways, Amazon maintains a good advantage over Apple, Google and Netflix. Apple lets you rent or buy video, but has to defer to its Netflix app for the smorgasbord. Google too has a la carte without a subscription plan. Amazon gives you both.

The inclusion of a game option is fine on the surface of it, but I will reserve judgment until I see actual performance and the various pricing schemes. The good news is that Fire TV has a platform that is closer to Google’s in openness. The company has already issued an SDK, and essentially told developers that most Android apps should be an easy port. A lot of us have been wondering why Apple has missed the opportunity to leverage its newfound gaming strength onto the TV. But it is the app environment that feels most constrained on Apple TV. The brand that pioneered the concept of apps seems unwilling to extend the model to the big screen.

The second-screen implementations look compelling, but again, I need to see how they work before saying more. By opening the platform, however, Amazon is inviting dual-screen implementations we haven’t imagined yet. Film references and synchronized experiences are the low-hanging fruit for developers. But Amazon’s Imdb assets and existing X-ray techniques promise rich content easily accessible for augmenting first-screen experiences.

The voice search tool could be a deciding innovation. It speaks to (pun intended) a real choke point for TV interfaces. The Amazon site churlishly depicts the problem in its demo video with an onscreen interface that resembles Apple TVs. It doesn’t take more than a glimpse for any Apple TV owner to empathize with the pain of navigating the virtual keyboard with that chewing gum-sized remote. By putting the voice sensor on the remote rather than on the distant box itself, Fire TV spares the viewer from the awkwardness of having to bark at the TV.

Finally, Amazon’s recommendation engine is polished and informed by a unique range of customer inputs. Despite the infamous missteps from gifting and the like, Amazon’s suggestions across media types continue to amaze me and drain my pockets.

Chromecast was a virtuoso stroke of technical smarts that has inherent tech geek appeal. It reminded us that Apple TV needed a refresh even if Apple was abandoning plans for its own TV. Amazon’s play hits Apple on multiple weak points at once, and unlike Google it has a convincing blend of customer reach, understanding and content depth.