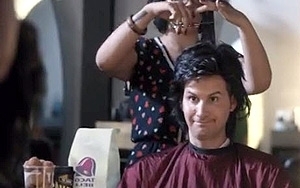 Eight days after announcing the national rollout of its first breakfast menu and the first TV spots in its campaign — which featured "Ronald McDonalds" endorsing the new items — the QSR has released a second spot that takes on McDonald's even more directly.

During a press briefing, Taco Bell CMO Chris Brandt also revealed that Taco Bell will release the latest new variety of its wildly successful Doritos Locos Tacos in May, along with other new items.

In the new 30-second breakfast ad, dubbed "Get with the Times," a young adult male, singing to the tune of "Old McDonald Had a Farm," tells the story of his transformation.

Seems that after eating Egg McMuffins for breakfast since 1984, the news that Taco Bell had introduced a Waffle Taco inspired him not only to start eating those tacos (and the chain's new A.M. Crunchwraps), but to get his mullet hairdo trimmed, buy tighter pants and take down his Loverboy poster.

The spot's ending voiceover urges viewers to "move on from your old McDonald breakfast with Taco Bell's exciting new breakfast menu." This ad, like the first ones, is from Deutsch LA.

Brandt, who said the chain knew it had to have a "disruptive" ad campaign to go up against McDonald's, with its 31% market share, said the Ronald McDonald TV spots to date have generated more than 1 billion earned impressions on social, 5.5 billion other earned media impressions, and 3 million views on YouTube.

He declined to give sales specifics (saying Taco Bell is in an SEC-mandated quiet period), but said the chain is "very pleased" with the consumer response to the four main offerings (the Crunchwrap, Waffle Taco, Cinnabon Delights and a Steak & Egg Breakfast Burrito), adding that it's been pleasantly surprised by the demand for coffee, as well.

He acknowledged that while Taco Bell believes all of the items will have longevity, "time will tell." And he said that the chain is in the process of developing new breakfast items, though declining to be more specific about their nature or timing.

Brandt did reveal that Taco Bell had, prior to the menu rollout, tested an oatmeal, a yogurt parfait and other coffee beverages, among other items. However, for the rollout, the company wanted to stick to a few items that were expected to drive the largest sales volumes, and focus on ensuring seamless in-store preparation and implementation of these.

Shortly after Taco Bell launched the breakfast campaign, McDonald's launched a free coffee offer. It also tweeted an image of its Ronald McDonald clown brand spokesperson patting a Chihuahua (Taco Bell's former mascot), with the message: "Imitation is the sincerest form of flattery."