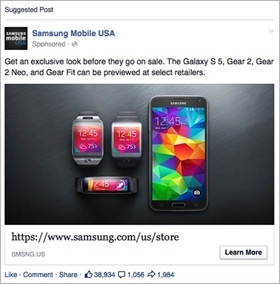 There has recently been a lot of discussion over Facebook’s organic reach ratios, which appear to be declining for most brands and publishers. With the rise of mobile viewing, more content pushers are competing for less space within users' News Feeds. Some marketers even think it’s a ploy by Facebook to push them into paid media.

Still, social media marketing firms are racing to alleviate clients' reach-related concerns, and in some cases improve their paid offerings. SocialCode, for one, is rolling out Post Predictions -- a new service the company claims can predict the lifetime reach and engagement of organic and paid Facebook Page posts within an hour of their publishing.

The service should help marketers identify posts that are worthy of paid media, as well as the right combination of creative and paid media to achieve reach and engagement goals.

"Changes related to Facebook's organic reach indicate that organic reach is going to be decreasing, and we are moving toward paid reach being more effective,” Kant said on Thursday. “Now that we are moving toward paid, it becomes more and more important to evaluate which posts to promote, and when organic predictions can help answer that question.”

“If predictions show that posts may not meet the KPI goals, then a decision to promote the posts can be made in a timely manner. In another scenario, if no KPI minimum exists, a post that is predicted to be well-performing could be promoted early to maximize efficient media spend," he added.

The new Message Optics dashboard presents the Post Predictions reach and engagement estimate in the form of a band, with upper and lower limits.

Predictions are frozen 12 hours after going live or once a post is promoted with advertising -- whichever comes first. They are generated for both impressions and storied engagements like likes, shares and comments.

For direct-response marketers, the new Message Optics also reports against key metrics like cost per action (CPA), revenue and Return on Ad Spend (RoAS), while a new paid conversion score is available for those marketers using Facebook conversion pixels.

The is also comment analysis for Facebook for clients to identify which members of the network’s community are most vocal about their brand.

For Page owners with more than half a million likes, organic reach fell to just 2% in February, according to a recent report from Ogilvy & Mather.