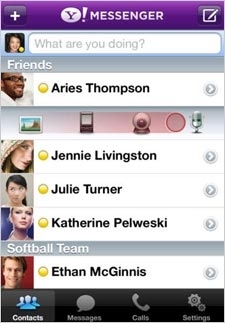 Facebook on Thursday confirmed a TechCrunch report that it's pulling chat messages from its primary apps -- a not-so-subtle move to send users to its Facebook Messenger app. The move underscores the silo strategy the company has embarked on when it comes to launching more individual apps rather than adding features to its main app.

"Taking messages out of the Facebook app lets us focus on making Messenger even better for everyone rather than working on two messaging experiences," explained Facebook in a statement. Fair enough -- but the step seems a bit heavy-handed. Does that mean the company is going to pull photos from the Facebook app next because Instagram offers a better photo experience?

Not likely. It doesn't want Facebook proper to become a ghost town. But it does raise a question about how well the multiple-app strategy will work out for Facebook as it refashions itself into a mobile company.

Given that apps represent the majority of time spent in mobile, and people tend to use different apps for specific tasks -- Google Maps for directions, Pandora for music, Fandango for movie tickets -- it seems a natural step. And Google, Apple and Yahoo each have their own suite of apps, so Facebook doesn't want to cede the field to its competitors, especially Google.

With Instagram and WhatsApp, the company showed its willingness to spend big -- very big -- to buy its way into the app game. But even Facebook can't throw around billions every week to pick up another hugely popular app. With the rollout of Paper in February, the social network signaled its intent to turn out its own line of stand-alone apps targeting different niches.

Paper instantly drew glowing reviews in the tech blogosphere, with many reviewers highlighting its ease of use and slick interface compared to the flagship Facebook app. It rates four stars in the App Store. So, off to a good start. But as of February, it only had about 200,000 U.S. users compared to 31.5 million for Facebook Messenger and 99 million for main Facebook app.

While Paper's user base has certainly grown since then, it's not clear it will ever have anything like the audience of existing Facebook apps. Andrew Lipsman, VP, marketing and insights at comScore, notes that the network affect won't necessarily help drive up the audience for a content-focused app like Paper as it would for a social or messaging app.

None of those options sounds really compelling, though. Graph Search is still a work in progress and would face competition as a stand-alone app from Google and Google Maps, Yelp, Foursquare and other local search apps. Google had enough distinct properties like search, Gmail, YouTube and Maps that translated well as separate apps. That's partly why it has five of the top 10 apps by reach.

Similarly, Yahoo has its content properties like Finance, Sports, and Flickr that have been ported over to mobile as stand-alone title. The path to creating a series of distinct apps is not as clear for Facebook, where so much of the user focus is still on one core feature: the news feed. So it's hard to see the company becoming a hit factory for apps.