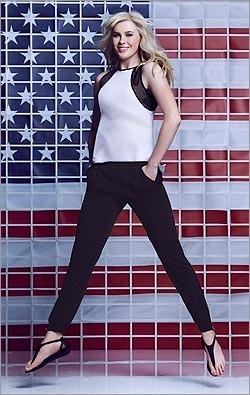 Macy’s is revisiting last year’s American Icons marketing campaign, this time tapping the likes of swimmer Ryan Lochte, model Ireland Baldwin, and actress Zooey Deschanel. And in addition to the red, white and blue imagery and the tie-in to events like its Fourth of July fireworks, the Cincinnati-based retailer is also re-upping its link with Got Your 6, a veteran empowerment initiative.

Macy’s says last year’s efforts raised millions for the group, which aims to connect resources within the entertainment industry to more than 30 veteran-focused, nonprofit partners, working on everything from hiring initiatives to housing. On “Got Your 6 Saturday,” shoppers pay $3 at any register, with 100% of proceeds going to the nonprofit, and in return get a discount shopping pass.

It also plans to feature “America-Inspired” merchandise throughout its departments, incorporating designs from  Calvin Klein white label. Ads promoting those clothes star Lochte and Baldwin, and the line includes sportswear, jeans, dresses, swimwear, underwear, shoes and handbags. And the company is also heavily promoting this season’s ‘To Tommy From Zooey’ collection, with actress Zooey Deschanel appearing in ads. The vintage-inspired capsule collection is priced from $98 to $169.

Macy’s is supporting the campaign with special events, including “Macy’s Great American County Fair” in 20 cities; a contest that will give winners a trip to Macy’s 4th of July Fireworks, and “Macy’s Day at the Ballpark,” as well as a “Sizzle Showdown,”  a grilling contest with semi-finalists facing off throughout the country. (“America's Greatest Grill Guru” gets a $10,000 grand prize.)

The push comes at a time when stores like Macy’s are having to fight hard to capture American women’s clothing budgets. The NPD Group just released its tally of women’s apparel sales in the U.S., which rose 4% to $116.4 billion in 2013. But sales were up just 2% at department stores, reports the Port Washington, N.Y.-based market research company, compared to 8% at off-price retailers. (The biggest gains were in smaller apparel segments, including a 12% bump in sales of outerwear, thanks to a long cold winter.)

“With the continued increase of online sales threatening the traditional brick-and-mortar retail model, retailers and brands must be quick to adapt to the changing needs of the online shopper,” says Marshal Cohen, NPD’s chief industry analyst, in its release. “Seamless integration across all channels will help retailers maintain a better connection with their shoppers.”