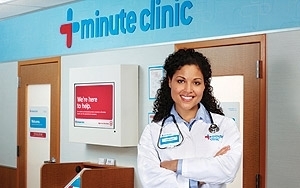 It’s not just the freedom to get an after-hours flu shot at a retail clinic: Turns out consumers are clamoring for all kinds of digital not-yet-on-your-doctor’s-radar healthcare services, according to a new survey from PwC’s Health Research Institute.

In fact, the growing list of services from in-store clinics, such as CVS’ Minute Clinic, Walgreens’ Healthcare Clinic and Target Clinics, are just the tip of the DIY healthcare iceberg. The study reports that the U.S. healthcare market, which it values at $2.8 trillion, is on the verge of reinvention, as consumers become increasingly open-minded to digitally driven diagnosis, including options delivered by apps, smartphones and computers.

“Consumers are willing to abandon traditional care venues for more affordable and convenient alternatives,” the report says, with nearly 50% of respondents saying they would choose new options for such common procedures as at-home kits to diagnose strep throat, send a digital photo of a rash to the dermatologist, or check their vital signs with a device attached to their phone. Overall, 64% say they are open to trying new, nontraditional ways of seeking treatment, if the price is right. (And 18% say they are open no matter what the price, while 17% are not open to new methods at all.

Middle-aged people (between 35 and 54) are warmest to the new healthcare possibilities, as are those who say healthcare expenses strain family finances, “and will be among the first to adopt newer, cheaper, easier options, as will those in rural and emerging markets,” it says. The survey was based on responses from 1,000 American adults.

Companies poised to deliver such novel services are “nibbling at the edges of the traditional healthcare ecosystem, setting the stage for a New Health Economy,” it says, and the list includes tech, telecommunications, consumer products and automotive companies. The technology is already in place for much of this, it points out, including a smartphone device that captures digital images of the ear canal, and the ability to email a doctor a photo of a mole or rash, and get a response in an hour.

Certainly, HRI reports, retailers are in the forefront of this consumer migration. Back in 2007, only 9.7% had ever visited a retail clinic. By last year, 35% had been within the last 12 months.

CVS, for example, recently announced it has hit the 20-million-patient-visits milestones, as consumers continue to grapple with shortages of primary care doctors and the Affordable Care Act. By 2017, it expects to have 1,500 clinics nationwide. Target and Walgreens clinics are also well established. RiteAid recently acquired RediClinic. And HRI reports that Walmart has been testing microclinics with Kaiser Permanente in California, including telemedicine connections to Permanente doctors.

But there are also plenty of new, non-retail entrants: AT&T, which opened its mHealth platform to developers in 2012; Time Warner Cable Business Class’s “virtual visit” experiment with Cleveland Clinic caregivers; and Google’s introduction last year of Calico, which focused on aging and associated illnesses.

“Early glimmers of healthcare’s versions of OpenTable and Hotwire can be seen in upstarts such as ZocDoc and iTriage, while others are pitching 24-7, flat-fee online evaluation and treatment,” it says. “Within a decade, the health business will look and feel like other consumer-oriented, technology-enabled industries. Soon, it will have its own Amazon.com-style, iconic, new economy brands.”

But such changes, it adds, require a major reinvention of healthcare marketing, as consumers shift to DIY medicine. “Patients are becoming influential opinion leaders,” it says. “Companies will need to determine how to address the growing diversity of influencers in their marketing campaigns.”